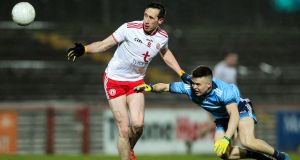 Tyrone footballers will be happy to have a “fresh approach” in 2021, according to Colm Cavanagh, the last of the county’s All-Ireland medallists to retire. Twice an All Star, Cavanagh, who is 34 this year, stepped down last year before the delayed championship began.

He didn’t miss a long campaign, as in the emergency knock-out format Tyrone lost their only match against Donegal, after which manager Mickey Harte stepped down, having delivered all three of the county’s All-Ireland titles in the course of an 18-year tenure as manager.

The last of these came in 2008 when Cavanagh, younger brother of that season’s Footballer of the Year, Seán, came on in the final and landed the third of the team’s three-point volley in injury-time, which sealed the unexpected defeat of Kerry.

He had been a regular for the county in the pre-pandemic league schedules and his last match for the county was the defeat of All-Ireland champions Dublin on a rain-lashed night in Omagh last February.

The decision to retire came in September before the championship started. At the time there was no acknowledgement of his 13-year career from either management or the county board – “it was a wee bit disappointing if I’m being totally honest with you”.

A press call on Thursday revealed that he might reconsider the retirement now that new management is in place with Fergal Logan and former All-Ireland captain Brian Dooher.

Cavanagh was also asked had there been a sense that the team might have benefited from a change at the top.

“Possibly. When somebody is there for so long – listen, it’s very hard to question the credentials of Mickey Harte and all that but when you look at the fact we hadn’t won an All-Ireland in that length of time. The standards we set in Tyrone are very high.

“Ulster successes came and went and I suppose the last few years we had a few near-misses and a couple of matches we could have managed better whether it was tactical or player-related.

“There was that sort of sense that to get to that next level – yes, possibly there could have been a shift and it would have been a positive shift. It’s very hard to put your finger on it. It’s not as if people were talking about Mickey in the dressingroom, that he needed to go, but I do think there was that general sense people would like to see something fresh.

“There were a lot of guys there who had played under Mickey for a long period of time and not getting over that final step in terms of winning another All-Ireland was on people’s minds, the likes of probably Mattie Donnelly who had been playing for a long time and hadn’t got to the highest part of the game.

“There would have been a consensus it would have been nice but at the same time nobody was going to question Mickey’s ability. He has done so much for Tyrone football and brought so much positivity over the years.

“You’re effectively starting fresh for Fergal and Brian here again. I think players now will be happy to have that fresh approach but was there a general consensus Mickey had to go? Not really, probably. But now that it has happened the guys will be really looking forward to the coming season.”

Cavanagh acknowledged that the new management team had prompted him to reconsider his own retirement and although he declined initial overtures from Logan and Dooher, he said that he hadn’t made a final decision yet.

“I would never have completely ruled it out, but I think at this stage unless something changes in my head over the next few weeks then I’ll probably not see a return, but I wouldn’t 100 per cent rule it out at this stage.

- Cavanagh was speaking as a member of judging panel at the announcement of the 2020 Electric Ireland GAA Minor Special Recognition Awards, which were to recognise minors who have gone above and beyond in their community during the challenges of Covid-19 and winners include Ciarán Caulfield (Meath, Leinster), Tomás Lynch (Limerick, Munster), Michael Quinn, Josh Schnell, Shane McKenna, and Niall Óg McGuigan (Antrim, Ulster) and Jack Beirne, Andrew Jordan and Mark Rogers (Roscommon, Connacht).