Seán Moran: Opening weekend casts light on both past and future 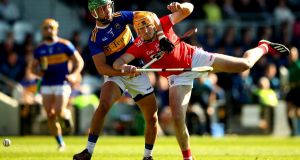 Tipperary’s James Barry and Declan Dalton of Cork. Tipperary were the story of the weekend. Photograph: James Crombie/inpho

Páirc Uí Chaoimh on Sunday, an evening as bright as the afternoon but considerably chillier with the final tidying away of a championship fixture taking place, conversation turned to the past. How different it was.

The following is taken from the post-match views of managers Liam Sheedy and John Meyler reacting to Tipperary’s commanding performance and win.

“Today is a good start,” said Sheedy, “and that’s exactly what it is. We need to go back; we need to rest our bodies and there’s a lot of tired limbs there. A lot of lads put their bodies on the line for 70-plus minutes. I’m delighted but I’m a realist and I realise that’s it’s only two points.”

“Yeah, look it’s seven days but that’s the beauty of the Munster championship. The match is over. We just need to reorganise and focus now on Limerick next week. Away to Limerick and we need to get a win and that’s basically it.”

Nothing exceptional there from two managers immediately homing in on the next task and letting the day go, for better or for worse.

It was of course insane but it was tradition: the championship as a kind of mad pageant where teams stepped up to have one shot at it and if they failed, back to planning a summer in the US or other, non-hurling pursuits.

But go back 20 years and beyond – before the original “back door” was declared ajar – and the environment was entirely different.

In the 1992 Munster championship, on June 7th, Cork and Tipp met like last weekend, in the old Park. They had won the previous three All-Irelands between them, Tipperary twice and Cork in between. The counties had a year later each brought the curtain down on not only on other’s reign but on their entire season.

It was of course insane but it was tradition: the championship as a kind of mad pageant where teams stepped up to have one shot at it and if they failed, back to planning a summer in the US or other, non-hurling pursuits.

Four years later, Clare, as the most celebrated champions in years, had their first defence of the All-Ireland on a broiling mid-June afternoon in Limerick.

Settled in the home side’s favour by Ciarán Carey’s timeless point after a helter-skelter comeback, it meant that Clare had enjoyed just one summer afternoon as All-Ireland winners, followed by roughly 11 months berating themselves for not closing the deal in the Gaelic Grounds.

It’s hard to remember when the five established hurling counties in Munster have been all so evenly balanced and Leinster has been making a good stab at creating some suspense over the identity of the three qualifying counties.

The first weekend of this year’s championship didn’t throw up any seismic shocks although Carlow gave a fine account of themselves in Salthill and get to welcome neighbours Kilkenny – a change from when many of the locals supported them in championship down through the years, as noted some weeks ago with good-humoured chagrin by Carlow’s Martin Kavanagh.

In Munster after an inaugural year in which just two away teams managed to win matches, that total was reached on the first afternoon.

It was no surprise that the opening shots of the campaign would be disproportionately instructive. As a calculus, they represent 20 per cent of the fixtures but about 40 per cent of the relevant data.

Tipp players had that lean and hungry look – to the point where it was debated whether a colossus like Pádraic Maher is best suited by shedding too much heft.

In brief: Dublin may struggle more than expected to land necessary scores; Kilkenny’s injuries may be significant but under the irascible gaze of Brian Cody – like Greg Kennedy – the manager’s teams remain exceptionally hard to beat; home advantage didn’t turn out to be a magic potion for Waterford although they were slightly unlucky not to seize something from the visit of Clare.

Tipperary though were the story of the weekend.

Tony Considine, Clare’s All-Ireland winning selector, was the first to mention in the press box that having got sight of them down on the pitch the Tipp players had that lean and hungry look – to the point where it was debated whether a colossus like Pádraic Maher is best suited by shedding too much heft.

The verdict on that wasn’t long coming. The all-Maher half-back line were – to deploy accurately an adjective over-used to the point of banality – awesome.

Sheedy, whose return to power is after a ho-hum league looking as forceful as his first stint, paid tribute to one of his carefully assembled back-room team Cairbre Ó Cairealláin – unsurprisingly shorthanded to “Carbs” – who has directed the strength-and-conditioning work that turned out such a menacing unit.

With Tommy Dunne and Eamon O’Shea on the coaching side, there was purpose, good decision making and clinical vision, noted in Nicky English’s analysis especially in the case of John O’Dwyer, who was alert to the killer ball for John McGrath’s goal rather than just another notch in brackets against his own name.

A barrage of scores from Tipp – their eighth time to tally more than 30 points in six championships – hasn’t always told us anything we didn’t know about the team’s capability but the sight of them looking like All Blacks was a strong indication that they are unlikely to be putting down their best display of the summer less than half-way through May.

For Cork it all becomes tricky. They were unbeaten last season on the way to back-to-back Munster titles; now they have lost their opening home match and head for Limerick next week, suddenly in urgent need of points.

For added reassurance, only two teams last year in either province managed to win a match a week after losing one and of the five teams who lost their first fixture in 2018, four failed to progress.

A week in and it’s all to play for but we’ve a better idea of who’ll be playing for it.

1 Pete Sampras: The forgotten great with the best serve in the business
2 Cam Newton broke the mould: Can his flame be rekindled at the Patriots?
3 The unsolved mystery of Goran Ivanisevic’s stunning Wimbledon win
4 The Game Changers: Vincent O’Brien, a pioneer who took Irish racing to the world
5 Tipping Point: DeChambeau’s transformation raises questions, but who will ask them?
Real news has value SUBSCRIBE