Kiely and Limerick far from ready to rest on their laurels

Munster title the next objective for manager and his ambitious, hard-working side 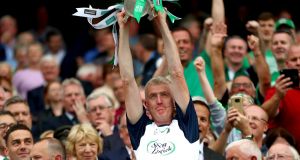 The lobby of Citywest, the morning after delivering Limerick’s All-Ireland hurling title, and minutes before completing the last step in its 45-year homecoming John Kiely makes a gently promising plea.

“Humility is one of the great attributes that all the great teams have had,” he says. “If you look at the Kilkenny teams for the last 15 years. The challenge to these boys is to be able to carry their success on their shoulders, and if we can be the same people we were a year ago in a year’s time, I think we’ll have done a very good job.”

Nine months on, and with Limerick about to begin the defence of that All-Ireland title with Sunday’s visit of Cork to the Gaelic Grounds, it seems his boys are doing all right. After ending 45 years of pain without an All-Ireland, they ended 22 years without a league title with a similar sense of destiny and intent.

There was certainly no hangover.

Outside of Kilkenny, who managed in four times in recent years, Galway were the last team to win a league title immediately after the All-Ireland, back in 1989. The decision not to bring the Liam MacCarthy cup within the four walls of any public house may have helped.

Indeed everything about that league final win over Waterford – including the introduction of substitutes like Mike Casey and Shane Dowling – suggests this Limerick team are very much the same people they were last August.

So how is Kiely himself holding up, nine months on?

The Limerick manager gently blushes when the question is put to him ahead of the Cork game. The 47-year-old, principal of Abbey CBS in Tipperary town since 2016, last summer said he could count on two fingers the number of full days he’d missed at school since taking over the position in September 2016; managing Limerick is certainly no hobby, only the last thing Kiely was about to do was allow any success get to his head.

If anything, he suggests, it’s about being exactly the same John Kiely.

“Every day you go out it’s the exactly same, you’re depending on yourself to make the right decisions,” he says. “In terms of naming the team in the first place, in terms of the preparations, and in terms of whatever influence you can bring on the game, because it’s usually very small.

“It’s ultimately down to the players, it’s their team, it’s their performance. It’s up to them to do the work on the field, our influence on the sideline can be very small really. But it’s really the exact same challenge, you live on your tenterhooks, hoping you’re doing the right thing.”

Last year presented his team with their chance to do what no Limerick team could do since 1973; the challenge of defending it, by natural extension, can’t be any easier.

“Every day you go out you’re trying to find a better level of performance, and ultimately get the result you’re looking. And in hurling there are so many teams out there capable of beating each other, and that’s a great way to have it.”

Their Munster draw wasn’t entirely kind: after a bye last Sunday, they face Cork, then after another week off, have Waterford (away), Clare (at home), and Tipperary (away), over three successive Sundays.

“It’s about keeping it simple, allowing players as much time to rest between matches. You can’t really get any work done the weeks in between. It’s just ticking over. You also need to keep an eye on the players who aren’t starting, they’re the most important group really, the guys you will rely on to finish matches, or maybe start the next one. That’s the tricky part alright. Because you do need to use more of the players.”

One of the lessons of last summer was the defeat to Clare, in the last round, having won their opening three.

“The perception was we were flat, when if you analyse it, it was just a poor performance. And Clare played exceptionally well. So that makes it twice as difficult, hence we got beaten by 11 points. Sport is about how you react to any given set of circumstances. The group is resilient, they were very hurt by that performance, and the only way back was to drive on.”

Kiely takes lessons from other sports, admits he’s a fan of golf, especially Tiger Woods, only now his chief goal is delivering a first Munster title to Limerick hurling since 2013.

“We all know how competitive it is. I think in the present era you really have to earn it. Five games to win it, whereas before you’d have maybe won an All-Ireland and a Munster championship with five games.

“I’ve seen nothing to leave me thinking these guys are anything other than ambitious, and hard-working. When you have those two ingredients you give yourself a chance. They’re still very young, so it’s not like they’ve lost any appetite. It’s only increased their appetite, to be honest.

“They’ve seen what it’s like to be part of a group that’s performing well. They’ve had some rough years as well, so seen what’s it’s like at the other side too, and I think they’ll be working very, very hard to remain as competitive as we can, for as long as we can.”