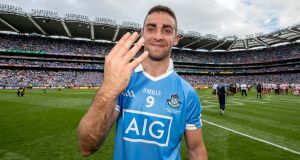 Dublin v Louth, O’Moore Park, Portlaoise, Saturday May 25th, 7.0pm. Now that there’s an official starting point in their quest towards the hitherto unconquered summit also known as the five-in-a-row it seems perfectly fair to ask James McCarthy exactly how Dublin intend going about it.

As if McCarthy or anyone on the Dublin team is going to see it that way. McCarthy hasn’t won six All-Irelands already without taking each one as it comes, only that doesn’t mean he’s not aware of the task at hand either.

His job with AIB means McCarthy meets plenty of customers every day of the week wishing him well, plus he has a mother too you know. While his father John was a three-time All-Ireland winner with Dublin, his mother being an Offaly woman also means there’s always the reminder of what they did to Kerry’s five-in-a-row quest in 1982, the last time a football team stood on the cusp of such history.

The latest reminder was over Christmas, when they watched the RTÉ documentary on how Offaly took down Kerry in 1982: “Yeah, my mother being an Offaly woman, I’d have had a vested interest,” he says. “It was good.”

No bearing whatsoever, naturally, on Dublin in 2019.

“Not really, I enjoy the history of the game, I enjoy programmes like that, I’ve watched a good few sports documentaries. I don’t know about taking anything out of it. The summer is the summer, and the games are the games.

“From our perspective, we’ve never talked about any ‘in-a-row’, all that kind of stuff. We take every year on its own, league first, then it’s championship. Same thing this year.

The date against Louth at least affords Dublin the chance to focus on something: they’ve been idle since the last round of the league on March 24th having failed to reached the final for the first time under manager Jim Gavin, in charge since 2013.

Dublin last played Louth in the 2012 Leinster quarter-final, under then manager Pat Gilroy, which Dublin won by 16 points (2-22 to 0-12) after easing off significantly in the second half; Louth failed to score from play in the opening half.

“It’s tough the first few weeks, you don’t know who you are playing, at least you have a focus now and have two weeks to build into the game and get ready for it.

“I didn’t see much of the game on Sunday, but Louth had a good win (over Wexford) and they had a good league campaign, narrowly missed out on promotion so we’ll get ready for them.”

It’s also the third successive year Dublin have opened their campaign outside of Croke Park, so nothing novel about that; the way the league ended, however, does present some fresh questions.

“It was a mixed bag from us really, mixed the good and the bad. But it was great in other ways. We had seven games, close games all of them and a few new guys blooded in and lads getting game time and getting them back to speed so from that perspective it was good.

“But we’re absolutely not concerned, we broke up after the league went back to the clubs and had a break and now we are back working hard to get ready for the Leinster championship.

“The mood since we got back has been superb it’s nice to get to the club have a little break and refresh and clear your mind for a few weeks and since we came back we have been mad for it, we’ve been training hard pushing each other on and there’s strong squad there, competition has been very high so that should serve us well.”

While Paul Flynn’s decision to retire did surprise him (“you’ve got to understand it’s a huge commitment to give and he’s been one of the main drivers of the team for the guts of 10 years, a great servant of Dublin”), the return of Rory O’Carroll is less of a surprise.

“Rory’s a great fella, it’s great to have him around. He’s obviously been doing something since he’s been away. He’s been keeping himself in good shape. It’s a huge plus. We already have a great set of defenders and that will add huge competition to it.”

And any update on Diarmuid Connolly’s potential return?

“You’ll have to ask Jim that.”

What is certain is that at age 29, McCarthy still feels primed for the quest ahead.

“Some years you’re carrying injuries and some years you feel great. It depends on what type of season it is. Thankfully the body feels good and I’m just really looking forward to the summer. It’s just not my nature, I can’t hold back. I always go hard all the time, train hard and play as hard as I can every game. I think it’s served me well over the years and will continue to do that.”

Dublin’s meeting with Louth is the second act of a Leinster SFC quarter-final double-header on Saturday May 25th, following Meath’s clash with Carlow. The following day, Sunday May 26th, Westmeath face Laois (2pm) and Longford take on Kildare (4pm) in another double-header at Offaly’s O’Connor Park.