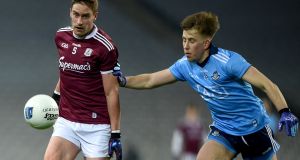 Galway’s Gary O’Donnell, pictured in action against Sean Bulger of Dublin, is around long enough to recall when Sligo got the better of the Tribesmen back in 2010 and again in 2012. Photograph: Tommy Grealy/Inpho

“We’ve been forewarned,” says Gary O’Donnell, “the results at the weekend show the underdogs are well and truly raring to go.”

Sligo are unquestionably underdogs, without a win in their last nine competitive games, including seven straight league defeats in division three, and a 21-point loss to Galway in this same fixture last year (before losing to Armagh in the qualifiers).

Still, as captain of the Galway side that won the Connacht title in 2016, O’Donnell is around long enough to recall when Sligo got the better of them, including the 2010 semi-final under now Galway manager Kevin Walsh, and again in 2012.

After their slightly edgy win over London in the quarter-final, Galway won’t be heading to Markievicz Park without fault either: “London was very much get the job done, prepare for the next game,” says O’Donnell. “The performance, maybe, could have been better at times, we’re weren’t as clinical as we wanted to be, but the main part was the result.

“The management wanted to take out the carnival atmosphere, which it is over there, a big event. We just wanted to get the job done. The clinical side was the most disappointing, we felt we’d loads of scoring chances, scored 16 points. And probably didn’t put the game to bed as early as we wanted. London, to their credit, had a decent league campaign over the years and made the game competitive.”

What matters for Galway in 2019, he says, is building again on last year, when they made the All-Ireland semi-final, but fell to Dublin without much resistance: captain Damien Comer is still sidelined with the after-effects of an ankle injury, but otherwise he feels Galway are still moving in the right direction. Sunday will tell more.

“Four or five years ago we were back down the pecking order, division two, struggling at times, and we weren’t going to be competing for All-Irelands within a year, the principals and structures and ideal are in place, and we’ve blooded new players, built a big panel, and that was the plan.

“It started off under Liam Salmon in 2009, we always played good football, in division one, competing quite well. We went through a number of managers in the meantime, probably fell back a little, to division two. But in fairness since the management came in they’ve ticked all the boxes, steady progression every year, and yes, the most disappointing thing is always your last game, and maybe we haven’t always exited the way we wanted, in big games, but consistency well we’ve addressed those.

‘Learn from our lessons’

“The next step is to move on further. We’ve a very ambitious group and we want move on this summer. At the same time it’s a results business, we made the All-Ireland semi-final, for the first time last summer after a long time, and the main aim is to get there again and learn from our lessons from last year.”

At 31, a teacher in Athenry, O’Donnell does get to enjoy the summer off work, but has never once questioned the commitment involved. “Not really, I enjoy it. There would be a few more in my boat as well who have been there around the same time. The lads enjoy it. I often say if it’s a case where I’m not enjoying it I’ll pull the plug on it. It’s very demanding, don’t get me wrong, but at the same time – between the highs and the lows – it’s very enjoyable.

“Before that there would be a lot of downtime, you’d train collectively maybe three times a week and there would be no individual stuff. Whereas now you are training collectively three to four times and you have to do things then individually on your own. There’s a lot of accountability, a lot of time going into video analysis, a lot of time going into nutrition, strength and conditioning, you name it. The wish is that it will all be for something good.”