Nicky English: Limerick highly charged but the energy supply may not last 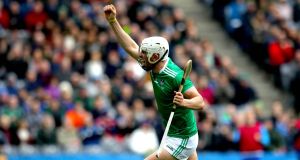 Limerick’s Aaron Gillane will be operating as a lone-wolf again.

Like last year, I expect it to be impossible to predict several of the individual games let alone the bigger picture with any degree of accuracy. In the first year of the new format, it was striking how many extraordinary recoveries were made by teams, frequently nine points behind and on the edge of the cliff.

It was probably the most dramatic indication of how closely matched counties were. In the end Limerick came out on top and on their league form this year they have built on that success and kicked on.

This was the second league played with the new championship system in place. In 2018 it took teams a while to realise that it made little sense to chase the league flat out.

A year ago the top teams in the league, Kilkenny and Tipperary, made little impact on the championship, and I would also be reluctant to attach too much importance to what happened this time around.

Limerick’s success was a reflection of how consistent their form has become and the increasing extent to which the peer groups in other counties that they dominated at underage are graduating to senior. From now on, though, all of their opponents will be playing for keeps.

The big question for them is how successfully they can maintain their energy levels. Last year, Galway effectively ground to a halt through unexpected replays, which took an increasing toll on them.

In terms of styles the shorter play of Limerick, Clare and Cork, keeping possession and working the ball up the field is certainly in vogue. There’s huge athleticism required at wing back, wing forward and midfield, virtually moving in phalanxes, leaving space for forwards like Aaron Gillane and John Conlon, who stood out in last year’s championship.

They have to operate a lone wolf strategy of winning ball and holding it up but that’s the game and even Kilkenny have improved in adapting to it over the past year. They took their time but it’s the big question for Tipperary: can they embrace that style?

Going back to their All-Ireland win in 2016, there was a lot of aerial combat. Galway and Tipp went at it with long play and more toe-to-toe hurling but that game has evolved and even more rapidly in the past 18 months. Successful teams are playing the ball shorter, creating that space.

Beating that requires high levels of mobility and from a Tipperary perspective it will be vital to see how they cope with these demands and evolve the 2016-17 model. Is the necessary athleticism available to Liam Sheedy?

It’s not all gloom for them. You could as easily say that Tipp, with all of their injuries and the resulting lack of preparation, the early defeat by Limerick and playing on, on the back foot, still came within the width of the post of getting through last year.

Then there is the annual question mark over the Munster championship. Cork have won the last two and not reached an All-Ireland final. They were close last year but the fact is that nine of the last 12 Munster winners have not won their All-Ireland semi-final.

John Meyler could be forgiven for wondering if a third provincial title is worth the effort. However they go about it, I have a sneaking feeling for Cork. There are doubts based on their league form and set-up but they have at their disposal the best under-21 team from last year - even though they didn’t win the All-Ireland - and if they get off to a good start this weekend, they will take stopping.

They have pace, are comfortable with the modern game and have great firepower, further enhanced by the return of Alan Cadogan. Only a great block by Nickie Quaid stopped them last year even when hampered by a litany of injuries.

Ironically - because I don’t think they’ll win the All-Ireland - Tipperary could have a big say in that because they are likely to hit the road hard on Sunday. The spine of the team has the highest mileage in the field but they have huge experience and are well rested.

The outcome, and I do slightly favour Cork’s pace albeit in a contest that in my experience has always had a life of its own, will have huge ramifications.

For Clare and Waterford, this is a championship to look forward to. Clare got to Croke Park last year and played their best hurling since 2013, which should bring them on but Waterford’s home venue advantage will add to what has already been an improving team with the Bennetts on board and a solid league behind them.

I’m not convinced it will be enough to see Waterford out of the province but they’re better placed than last year.

Leinster should be fascinating between the novelty of Carlow, who have performed so well to get to the starting line, increased optimism in Dublin and Wexford after decent leagues and, on the negative side, the injury crisis in Kilkenny and Joe Canning’s - at best - medium-term injury absence in Galway.

We’ll know a good deal about it on Saturday evening. Last year Kilkenny improved but with a shallow pool of key players and a revolving cast of forwards they were still short. Under Brian Cody, they will be 105 per cent of their parts but it mightn’t be enough.

This weekend’s game is huge for both sides. The Dublin defence is good and good enough to cause problems for Kilkenny but have they the firepower to be better than last year? Can they start winning rather than just getting close?

I have a suspicion that even with all of the injuries piling up on Kilkenny, they can remind everyone that Nowlan Park is still somewhere that teams shouldn’t look forward to visiting.