Wiped out on their own kickout, defeated exiles had no answer to league champions 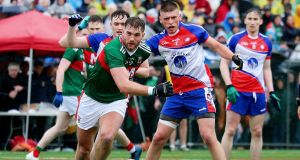 Mayo’s visit to Gaelic Park on Sunday was a Bronx tale in two parts: one on the field and the other of it.

While the newly crowned league champions took care of business between the lines with a first-half blitzkrieg, an extraordinary number of travelling supporters wedged themselves into every nook and cranny of the rain-drenched New York venue. And so it was that an utterly miserable afternoon turned into a festival atmosphere between local diaspora and the multitudes of green and red. Biblical numbers in the new world.

And with their prodigal son back at the helm, Mayo began the second James Horan era in stark contrast to his first. Back in 2011 the westerners famously escaped London after extra-time but there was no such drama in New York City.

Mayo hit the first 14 points of this match without reply. They went in at the break 1-15 to 0-2 to the good and stretched their lead out to 21 points in a going-through-the-montions second half. Save for a not-unfamiliar woeful wide count, a dozen in the first half ran out to 18 by the close, this was a perfect outing for Horan’s side.

The landslide represented a bloody nose for New York football, especially after three encouraging years which culminated in taking Leitrim to extra-time last season. They named seven New York-born players in their panel, a testament to the ongoing youth development work in the boroughs, with Michael Creegan and Shane Hogan starting while Tiernan Mathers and Ryan Kerley were sprung from the bench.

But Mayo winning was never in doubt. You wouldn’t find a bigger banker on Wall Street and once the Star Spangled Banner concluded, they took off. Those 14 points without reply were delivered by the 28th minute. Wiped out on their own kickout, New York had no answer to the level of the visitors’ performance. Mayo killed the natives with turnovers too. Lee Keegan, Aidan O’Shea and Matthew Ruane bossed the middle acres with authority. Keith Higgins and Paddy Durkan made a few of their stray-dog dashes upfield while Fergal Boland was a busy man out on the right, fisting over three of his four points.

Not a hint of complacency

Perhaps the biggest problem for the metropolitans, though, was that Mayo were on it. Not a hint of complacency. Evan Regan made hay with a goal and five points, including four frees, while excellent scores were struck by Jason Doherty, Keegan and James McCormack, the latter one of five championship debutants for Mayo alongside James Carr and Ruane, as well as substitutes Conor Diskin and Michael Plunkett.

About a quarter-hour in the exiles’ body language told a story of shell-shock. Mayo men flowed like the Hudson through a packed New York defence. Handling and keeping your feet on a ground were problematic but still New York will be disappointed with taking 13 minutes to launch their first attack and 29 minutes to register a score. Luke Kelly’s sweet strike was quickly followed up by a Daniel McKenna effort. But Regan’s goal, at the second attempt following Vinny Cadden’s fine save, was a fitting last act of the half.

After the break Horan’s men eased home. Colm Boyle was foiled for a goal early on but Mayo’s famous resilience wasn’t needed here. Instead it was their followers who had to show endurance by weathering the downpour on a cold but sticky, boozy afternoon beneath the 240th Street train terminus.

Fresh from their league final triumph at Croke Park five weeks ago, for Mayo this was more off-Broadway affair (quite literally, Gaelic Park backs on to the famous avenue) and Ciarán Treacy put over the pick of the second-half points before Andy Moran,making his 77th championship appearance playing for the fourth time at Gaelic Park, came on as a late substitute.

And that was that. Mayo advance. Their semi-final on Saturday, May 25th will be against the winners of next Sunday’s Roscommon-Leitrim clash. Start spreading the news.

Wales cry foul over Furlong’s scrum technique 15:01
Rowing: Ireland women to trial in Italy 13:14
Son Heung-min out for several weeks with broken arm 12:48
Mako Vunipola to miss Ireland game for family reasons 12:51
Man City’s Abu Dhabi owners not the sort to back down over ban 10:51
Crossword Get access to over 6,000 interactive crosswords