Seán Moran: Harte still believes he can bring back glory days to Tyrone 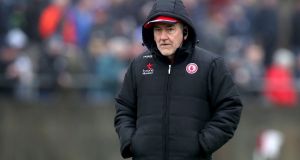 Mickey Harte: has been trying to retame the wilderness for 10 years at this stage but his conviction that he is capable of doing so has not wavered. Photograph: Bryan Keane/Inpho

In Keith Duggan’s revealing interview with Tyrone manager Mickey Harte on the day this season began just under a fortnight ago, there were flashes and crackles of the essence of a great manager: self-belief and conviction.

These qualities though need to be handled with care and there was some eye-popping dogmatism in Harte’s indignation at the Con O’Callaghan goal that as early as the fifth minute tolled the bell for Tyrone in last year’s All-Ireland semi-final.

He felt that Pádraig Hampsey’s peripheral vision had been slightly disrupted by referee David Coldrick and the player’s mistake in losing possession disproportionately punished.

“They make a little handling error and are turned over. And often a team will pay to some extent. But sometimes, you pay a high price. And we paid a high price that day.”

These are however capricious influences compared to Harte’s main bone of contention, which is that O’Callaghan shouldn’t have scored the goal. He should have been tracking back after Hampsey instead of being 40 metres higher up the pitch – or in another vernacular, ‘losing his marker’.

And then when Philip McMahon clipped the turnover ball into his centre forward, why didn’t O’Callaghan settle for a point?

“He didn’t really have any business to go for a goal,” said Harte. “A young fella like him just into the team... I know he is a quality player and all the rest. He could have been happy to take a nice point but he decided to go for the jugular. Obviously he would believe in his own ability to go past a static defender. But then he went on and said: ‘I am going to bury this’. So I’d have to give him full credit for that.”

But the reader can sense the struggle of Harte balancing the ‘full credit’ against what was clearly an affront to the orthodoxy, which he had created to such seismic effect all of 15 years ago.

Even last Saturday he was talking up his team after another routine dismissal by Dublin, emphasising the poor accuracy that cost 13 wides, and lamenting how Tyrone deserved something better from the match despite having faced 14 men for the last half-hour.

The managerial careers of Harte and Brian Cody have been largely co-terminus. This is the Tyrone manager’s 16th year in charge and his Kilkenny counterpart’s 20th and their paths have crossed.

Seán Cavanagh recalled after the 2008 All-Ireland victory that Cody had visited Tyrone and spoken of his admiration for them and their desire to own the pitch, to win all the individual contests.

Given the power that they represented in their respective codes for so long, it’s an irony that both are now featuring in conversations – admittedly tenuous in Cody’s case given that the longest he’s kept Kilkenny waiting for an All-Ireland is three years – about whether their counties need ‘new voices’ or ‘a fresh perspective’.

When you have fielded teams that have performed in the almost perfect nexus between individual talent and collective harmony, it must be hard to keep bringing the same instincts and perceptiveness to bear on situations and players that aren’t capable of hitting the same heights.

Harte has been trying to retame the All-Ireland wilderness for 10 years at this stage but you can be sure that his conviction that he is capable of doing so has not wavered. Long-serving managers who have won All-Irelands and, however unpromisingly, are chasing more make Monty Python’s Black Knight look faint-hearted.

In Loosehorse’s elegiac documentary Micko, Mick O’Dwyer reflected on the last days of his phenomenal Kerry team, the high point reached in the 1986 All-Ireland comeback against Tyrone, which sealed the ‘lap of honour’ three in a row.

But there followed three more years of trying to get back to the top before conceding that Cork had become unmovable in Munster.

“It was the wind-up of that team,” he said. “They were gone past it at that stage but they didn’t want to let go so they did continue for a few years but they got nowhere, to be honest. There was a deadness and a sourness about the whole thing and I made up my mind there and then that it was over.”

In his autobiography Blessed and Obsessed (with Martin Breheny), published just over 10 years ago, O’Dwyer was even blunter about the challenge of letting go.

“I should have left at the end of 1987,” he wrote. “The spell had been broken and it was time for a serious reassessment. I didn’t quit because I was still enjoying it and ever the optimist, I reckoned we could recover. At least that’s what I told myself. I was wrong.”

Seán Boylan was with Meath for 23 years. He remains the most successful manager the county has had but he spent six years after his fourth All-Ireland success trying to conjure up a fifth even as the prospect receded beyond the reach of everyone else’s wildest optimism.

“Even at the end,” wrote one of his most celebrated lieutenants, Colm O’Rourke, “Seán believed he could build another team which would challenge for an All-Ireland title if he was given sufficient time.”

Like Boylan in Meath, Harte’s status in Tyrone is unassailable and also like Boylan, none of the garlanded generations of players he shaped will be comfortable challenging him.

Harte’s desire and certainties aren’t unusual for a highly-decorated inter-county manager but precedent is not on his side.

Hourihane gives Kenny a nudge as Aston Villa sweep past Fulham 20:05
Rafael Nadal up and running as he bids for 13th French Open title 20:23
Positive omens for Stephen Kenny ahead of Ireland’s Slovakia clash 20:00
Fixture pile-up means Spurs could sacrifice League Cup 18:07
Why did it take the Seahawks years to trust Russell Wilson? 17:33