‘I hate being called a female sports broadcaster' 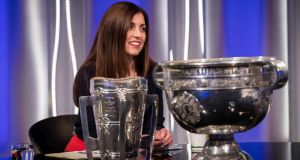 Joanne Cantwell, currently the host of ‘Saturday Sport’ on RTÉ Radio 1: ‘They pick out a bluffer straight away’. Photograph: Ryan Byrne/Inpho

When she was about 12 years old she decided her perfect job would be “a mixture of George Hamilton’s and Des Lynam’s”. Add her passion for Gaelic Games to the equation and then it’s probably fair to conclude that Joanne Cantwell has landed her dream position at RTÉ, that of successor to Michael Lyster as the presenter of The Sunday Game Live.

Lyster announced this week that he would be retiring from the role at the end of the 2018 Championship season, having presented the programme since 1984. The speculation about who would succeed him was brought to an early halt by RTÉ on Thursday with the announcement that Cantwell had been chosen.

Group Head Ryle Nugent described the 38-year-old as “an experienced and accomplished broadcaster” whose impressive CV “has been ideal preparation for her elevation to this position”.

A meaty CV it is too, dating back to Cantwell’s first job in broadcasting when she did weekend sports bulletins for FM104 when she was a journalism student at DCU. From there she moved to TV3, where she worked for seven years, before switching to RTÉ a decade ago, becoming a high-profile presence in both radio and television sport.

Her work has included presenting Against the Head, the rugby magazine show, occasionally anchoring RTÉ’s Champions League coverage, as well as her current role hosting Saturday Sport on radio.

Her interviewing skills are often lauded too, not least when she spoke with each of the three candidates to replace Hickey as president of the Olympic Council of Ireland last year, Willie O’Brien in particular, the then acting president, unlikely to forget his forensic questioning in a hurry.

But it was as a sideline reporter on The Sunday Game Live that she began her RTÉ career, with Cantwell’s own sporting roots in Gaelic football. She was first called up to the Dublin senior panel when she was 16 and was part of the team that climbed from the third to the first division, earning an All Star nomination along the way and a GAA scholarship to DCU.

Cantwell, who lives in Kildare with her husband Shay and daughters Emmy (6) and Alex (4), now has a string of firsts to her name as a female sports broadcaster, but she doesn’t dwell on them – and it’s a label she loathes. In an interview with The Irish Times last year she said, “I just never think about it in that way. I remember once being at a football press conference and the press officer standing and up and saying, ‘Welcome gentlemen’, seeing me and saying ‘Eh, ladies and gentlemen’. It was only then I realised I was the only woman there. It goes over my head, I genuinely don’t even notice.”

“The woman thing – I want to not even be noticed. You think back to Jacqui Oatley when she became the first woman to commentate on Match of the Day [in 2007]. All the fuss, it was ridiculous. What I hated about it all was how acceptable it was to even have a debate about it. There were people coming out and having a go before she even did it.”

“The reaction, it was just silly. ‘They shouldn’t be allowed.’ There is no ‘they’. Or there shouldn’t be. And the thing I hate more than anything is being called a female sports broadcaster. It’s only when that distinction is no longer made that we’ll be okay. But people write columns about it, it’s a man’s world and all that, but for me that’s the biggest problem, that distinction being made at all.”

For now she will continue her work on RTE Radio 1’s Saturday Sport and as a reporter on The Sunday Game, before taking over from Lyster next year when she will look to put her own stamp on the programme. And at least attempt to put some manners on Joe Brolly, Pat Spillane and Colm O’Rourke.

1 The game they loved so well: How cricket united Hume, McGuinness and McCann
2 Andy Farrell admits Ireland net may need to be spread wide in the autumn
3 Rory McIlroy steadies the ship after shaky start at US PGA
4 Brain as well as brawn on Sexton’s lockdown menu
5 Bryson DeChambeau’s driver snaps on seventh tee at US PGA
Real news has value SUBSCRIBE