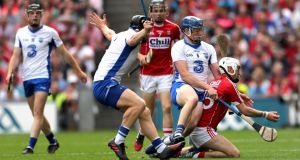 As the word went around at half-time last Sunday, bringing it to the attention of those in the press box who had not seen Austin Gleeson tugging off Luke Meade’s headgear, there was a collective groan.

Whatever the public perception, few reporters want to spend the run-up to an All-Ireland final on hearings – or appeals and arbitration – watch. That such would be the media prospects was confirmed when Conor Gleeson picked up a red card in the dying minutes of the match with the semi-final not just dead but plucked and ready for the oven.

Should he end up serving a suspension it will be tough because he was excellent in the semi-final only to risk everything when he lost his temper with time nearly elapsed.

His namesake is very lucky, as his foul was the clearest breach of the headgear rule in a summer where it has become the signature infraction of the summer. The outcome however is not good news for the GAA’s enduringly tough task of making the games better behaved.

Suspensions, especially for big matches, are regarded as cliff-hangers within Gaelic games. People wait with bated breath to see what’s going to happen because it’s never quite certain.

In a 1999 European Cup semi-final Roy Keane picked up a yellow card that, cumulatively, ensured he would not play in the final: not that he’d have to get ready for some serious committee room haggling but that he was simply out.

The plaudits he received after the Juventus match were based on his performance having been given in the sure knowledge that he was not going to take any part in what would have been the biggest match of his club career.

In the 2015 Rugby World Cup, Seán O’Brien was cited for a punch in a match against France and missed Ireland’s last match. Again, when it happened the team had no choice but to get on with it.

There are obvious differences between Gaelic games and professional sports. The latter get to play a lot more matches and absorb suspensions because they are served so quickly. The above examples are of disciplinary administration carried out by international bodies, free from any hope that they can be influenced by public uproar.

External authorities can’t be got at. The GAA is a community-based organisation and its decisions aren’t really seen as coming from an external source but more the sort of thing, like a speeding ticket or parking fine, that you bring to a local politician to make go away.

No one wants players to miss out on big occasions and the public response often emphasises that aspect of suspensions but would games be possible without rules and the agreement of both teams to abide by them?

In the case of Austin Gleeson, his exculpation is based on the clarification of his own match report by referee James Owens, who said that he adjudicated on the incident on the day.

That being the case, how did he not issue a red card?

There is a standard reaction to suspensions in certain quarters – mostly but not exclusively within the affected counties – that invariably depicts them as “a joke” or calls for the relevant rule and its associated suspension to be scrapped or drastically modified.

Sure enough, the opinion has been expressed in recent weeks, as another Waterford hurler Tadhg de Búrca faced suspension for interfering with the headgear of Wexford’s Harry Kehoe, that the rule was too absolute: if you intentionally behave that way, you are issued a straight red card.

Judging intention can be difficult but what happened on Sunday was one the clearer cases.

Is there merit in the cries for the infraction to be downgraded to a yellow card?

As it happens that was the punishment up until earlier this decade. What changed attitudes to the misbehaviour was its degeneration from interfering with headgear for purely mischievous purposes, such as undoing the straps in order to disorientate an opponent, into using the helmet as weapon against its wearer.

The alarm bells rang on this in 2010 when Tipperary hurler Declan Fanning had to have 25 stitches inserted in his head after Wexford’s Stephen Banville pulled on his headgear and metal edges became exposed, causing severe lacerations.

There was also the input of the GAA’s Medical, Scientific and Welfare Committee, which warned of the dangers of coup and contrecoup brain injuries if players were to have their head rattled around on a regular basis. As a result the yellow card was replaced with a red.

There has been zero tolerance for these offences, as player welfare is at stake. Galway hurler Adrian Tuohy was not pursued after knocking off Patrick Maher’s helmet in the semi-final against Tipperary only because the referee had not noticed what happened and proving intention against the player was complicated by his back being to the incident.

He could still be deemed fortunate and that would have been an awkward backdrop to any attempt to pursue Austin Gleeson but the GAA could have done without one of the most exciting players in the game getting involved in something they are so keen to eradicate – and with good reason.

Yes, it is good that the current hurler of the year will play in the All-Ireland final for a county that has been waiting 58 years for a title but it would have been better if he hadn’t jeopardised that prospect through indiscipline.