Seán Moran: Since 1987 the two teams have met 13 times in the championship 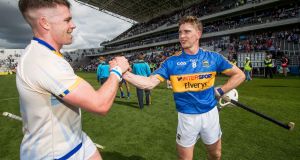 Last year in the football league final, Dublin’s emphatic defeat of Kerry was marked down as a turning point for Eamonn Fitzmaurice’s team which was seen to be too old and too slow for the dizzy cruising speed of the champions.

More cautious counsel suspected that were the counties to renew acquaintance in the late summer there would once more be little to separate them and so it proved.

The league has become an excellent briefing for the championship but it’s not yet prophecy.

All of which has again become topical as we anticipate a weekend with a similar establishing narrative: two teams who contested a league final, which culminated in an outsized beating for one of them, back a couple of months later for an All-Ireland semi-final.

It will be the fourth successive championship in which Tipperary and Galway have met and the third All-Ireland semi-final in succession.

This has been a significant hurling rivalry – more frequent than even Kilkenny-Tipperary over the past 30 years and spread more evenly – and took its starting point from the All-Ireland tussles of the late 1980s.

Despite its traditional isolation and Cyril Farrell’s famous summary of the county’s hurling disadvantages – history and geography – Galway have a few neighbouring feuds, Offaly, Clare and especially Tipperary. This helped colour the rivalry in the late 1980s when they were the two best teams in the game and controversy struck, as Galway were going for three-in-row.

When Galway’s Tony Keady was suspended for unauthorised playing in New York in 1989, the suspension was upheld in the week before the All-Ireland semi-final, on a vote of 20-18 at Central Council. It was darkly murmured that Tipp had had a hand in the whole business – despite having spoken and voted on Keady’s side at the meeting in question.

It created a charged atmosphere around the match in which two Galway players were sent off. As Antrim had reached the final by surprising Offaly in the preceding match, the mood on the day had been intensified by the knowledge that the second semi-final would in all likelihood decide the All-Ireland.

Since 1987, they have met 13 times in the championship, with Tipperary edging it at 7-6 but with so little settled dominion that neither county has won three of these matches in succession.

This year has marked a departure for Galway. They spent spring in Division 1B of the league and didn’t appear to fret much about failing to achieve promotion. Instead they simply won the league title, maintaining a recent trend by becoming the third county from the lower division to win the title and the first to do so while remaining there.

Galway manager Micheál Donoghue has been a low-key presence as the county manager. Maybe that isn’t surprising given the controversy that surrounded the position after the players’ heave two years ago but it would be a mistake to read very much into it beyond a disinclination to engage with the media.

He played at the top level with the county, managed his club Clarinbridge to All-Ireland success and was sufficiently well thought of by former Tipp manager Eamon O’Shea to be appointed a coach with the county.

Whatever about profile, Donoghue has instilled a measure of consistency in the team that has seen them surge relentlessly through the championship, establishing a consistency of performance not seen in years – even in 2012 the previous best season of the years in Leinster, their early outings were uneven.

Ironically it has revived memories of three decades ago when the county was winning what remains its most recent All-Ireland title.

In those uncomplicated times Galway entered proceedings at the semi-final stage, like a pole vaulter choosing the height at which it best suited to start competing. Having a settled team, they just appeared at the appointed time and for four years running blasted through the semi-finals into the final, winning the title twice.

It hasn’t been quite that simple since entering the Leinster championship but there has been a power and purpose to them thus far – but that will count for noting if they fall at Sunday’s hurdle.

In terms of a cause, Tipperary have a larger axe to grind. The league final defeat marked the start of a precipitous decline for the All-Ireland champions and they have an ideal opportunity to redress that.

The absence of an All Star defender, as in 1989, this time concerns Tipperary but it is their choice. Michael Ryan’s decision not to recall Cathal Barrett to the panel after injury is for disciplinary reasons and it’s a bold call, as there’ll be no shortage of finger-pointing if things go as badly wrong as they did in Limerick last April although the player actually lined out that day.

In the long run though, it’s hard not to sympathise with Ryan. One All-Ireland -winning manager told me years ago he had bent over backwards to keep a wayward talent involved but had to reconsider when it became apparent that his emollience was undermining morale amongst the rest of the panel.

Ryan has done his best to try to make this year different for Tipperary as defending champions. He was on course until March but has been blown into well-chartered territory in the meantime. Regaining control of the voyage would be a major achievement.

Since 1987 the teams have won seven All-Irelands – two for Galway and five for Tipperary – and on each occasion the route to success went through the other county. There’s a strong chance that by the end of September the tally will be eight out of eight.