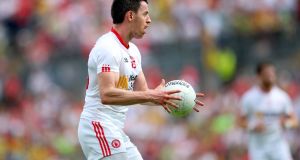 Tyrone’s upcoming All-Ireland senior football semi-final against Dublin represents a match-up whose appeal as a contest extends far beyond the respective sets of players and supporters.

The Dubs chasing a third successive title find their path barred by a team that has arguably discommoded them more than any other in the National League in recent seasons.

In the last five league matches between the counties there have been two draws, two one-point victories for Dublin and a single point success for Tyrone. Utilising league form as a divining rod to indicate the likely outcome in a championship game is not something to which many footballers subscribe and Mattie Donnelly is of the same opinion.

Speaking at the launch of SKINS new DNAmic team range at Kilmacud Crokes the 26-year-old Tyrone footballer was keen to emphasise the difference between league and championship. Players do draw down from any positive experience but there are codicils.

Donnelly explained: “We always seem to have competed well with Dublin. The only thing is we have never, not in my time, played against them in the championship and there is an unbelievable difference.”

Jim Gavin’s comments last weekend resonated with Donnelly when the Dublin manager expressed a satisfaction that the team and his players were coming good at the right time of the season. “It’s what good teams and good players do. They are going to be at the height of their powers.

“One of the main things that has got them so much success in championship football is the pace and intensity they have brought to it. I’d say it is going to be in stark contrast to the levels we have met Dublin in the league compared to what we are going to face in a few weeks.”

The most recent league meeting between the teams saw Mickey Harte’s side lead by five points with ten minutes remaining but the sending-off of Mark Bradley had a key impact on a game that eventually ended with honours even.

Donnelly, who watched the game from the stands, conceded that Tyrone should have been able to close the game out but argued that the Dubs showed a key character trait in clawing their way back on a filthy night weather-wise at Croke Park.

He continued: “It shows you the mental strength of the [Dublin] team. I was really impressed with how they got back into that game. There were a few stages in the league where they were behind and it was more their mental strength than anything else that put them back in games. They stuck to the basics and ground out results. They weren’t getting beaten. That’s what impressed me most in the league.”

Would you have beaten them if you had 15 players?

“I would have thought that at the time especially as Mark was playing up front on his own. He’s a vital cog in our system and I just thought the way the game was going we were in a really good position. Once he was sent off the tide started to turn. Against the Dubs you are going to need 15 men and no doubt about it. You can’t be a man down.”

Donnelly spoke about the influence that Peter Harte has on a game and his team-mates, the quality he brings while remaining self-effacing and totally subservient to the team needs. They played against each other at school, with each other as Tyrone minors and seniors so Donnelly is perfectly placed to evaluate Harte’s contribution.

He said: “I always tell young ones that he is the best example to follow in being a county footballer in that he has such a good attitude, is so humble and is always working hard.

“He has all the right attributes to be that leader that you are talking about. His form these last few years has reflected that. He’s one person who holds real value in our squad.”

Another is Seán Cavanagh and while sport only periodically doffs its cap to sentiment, the whole of Tyrone and some beyond the county border would like to see his career finish with a final flourish.

Donnelly admitted: “Aye, you would definitely. Even seeing him about the gym and training, he’s still staying on after and kicking. You do take time to stop and think about the commitment of that man over the years and he’s probably more enthusiastic this year than he ever has been.

“You probably draw hunger from it that you do want to put your shoulder behind the wheel and give him the best of your effort. Look, there are a lot of people that deserve fairytale send-offs but going out and getting it for him is the big one.

“There’s no doubt the service he’s given Tyrone and Gaelic football in general has been unbelievable.”