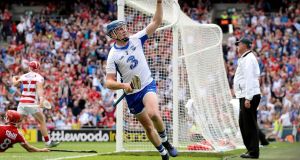 Austin Gleeson has been cleared to play the All-Ireland final against Galway. Photograph: Ryan Byrne/Inpho

Austin Gleeson will be free to play in next month’s All-Ireland final. The news emerged on Tuesday that the current Hurler of the Year will not face a disciplinary charge in respect of an incident in last Sunday’s semi-final victory over Cork in which he was seen to grab the head-guard of Cork’s Luke Meade.

He was cleared by referee James Owens, who in a clarification of his match report confirmed that he had adjudicated on the matter on the day. Once an incident is dealt with in the referee’s report, no further investigation is possible.

The news comes as a blow to the GAA’s attempts to discourage this particular foul within the game. The rule under Category III infractions is 5.19: “To behave in any way which is dangerous to an opponent, including to deliberately pull on or take hold of a face guard or any other part of an opponent’s helmet.”

Gleeson’s escape will be a considerable relief to Waterford, who face into the county’s first All-Ireland final in nine years and only their third since last winning the MacCarthy Cup in 1959.

One of the most exciting talents in the game, he overcame a slow start against Cork to register 1-2 and create the watershed score, a goal for Jamie Barron.

The county is expected to contest vigorously the automatic suspension for Conor Gleeson, who was sent off for striking in the 69th minute of the semi-final.

It will be a familiar trail for Waterford, as just before the semi-final they contested Tadhg de Búrca’s suspension for the same infraction before all tiers of the GAA’s disciplinary system, hearings, appeals and arbitration at the Disputes Resolution Authority.

It’s unlikely that Conor Gleeson will evade the suspension, as the offence clearly takes place and has been dealt with by the referee with a red card.