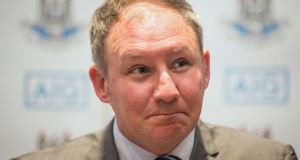 Mickey Harte may have eschewed diplomacy after Tyrone’s All-Ireland quarter-final win over Armagh, admitting they fully expected to win, and comfortably, but Jim Gavin rarely speaks in such bullish terms.

The Dublin manager convened an early-morning press briefing at a Dublin hotel on Monday, sitting across a table from media at 8am, but you would have needed to get up a whole lot earlier to coax him into trash-talking Tyrone.

There certainly were not any Harte-esque admissions that he and his Dublin players expect to win Sunday week’s All-Ireland semi-final tie comfortably or otherwise.

Instead, after batting away all questions relating to Diarmuid Connolly – the All-Star forward will be back available for that game after a 12-week suspension for interfering with a linesman during Dublin’s June win over Carlow – he got down to the meat and drink of killing Tyrone with kindness.

Just 10 days out from the biggest challenge of Dublin’s season to date, it was never going to be any different.

In Gavin’s defence, nobody could disagree with his suggestion that Tyrone are a hugely impressive counter-attacking force now, and that, even since the sides drew in the league in February, the Red Hands have added a vital cutting edge to their game.

“To retain any provincial title is a fair achievement, but to retain it in the style that Tyrone did in Ulster, at a canter, is a big statement, particularly when Ulster is such a competitive province,” said Gavin.

“They have been putting up big scores, and they’re a free-scoring team now, 6-77 in four Championship games is a mighty impressive tally.

“And it’s not just one or two players doing the scoring; they had 10 or 12 scorers against Armagh. They have that balance now, and they have a very good mix of experienced players, the likes of McCarron, McCrory in the full-back line, teak-tough defenders.

“They’ve also got a very good blend of youth there, from Sludden right up to Bradley up front, and a good bench to boot.”

Gavin, with three All-Ireland wins as manager, has yet to lead Dublin out against Tyrone in the Championship, though the counties have met five times in the league since he took over for 2013. Remarkably, there is just a point between the teams, in Dublin’s favour, 5-61 (76) to 2-69 (75).

Tyrone are a team that have definitely got Gavin’s attention as he seeks to become the first manager since Mick O’Dwyer in 1986 to lead a team to three All-Ireland titles on the trot. It is Tyrone’s apparent new-found scoring threat that Gavin spoke of on a number of occasions on Monday.

“We’ve always looked at them as having a big scoring threat. Even going back to our national league game in early February this year, they looked very impressive going forward, and they got a great goal in that game.

“Defence has always been their cornerstone, and they have always been an exceptionally good counter-attacking team, but they have really added to it since that league game.

“If you look at their Championship games it has been so, so impressive from them..players coming off the bench have really added to it as well.”

Dublin’s last outing was a comfortable win over Monaghan in the Championship quarter-finals. It remains to be seen if that is a bad omen as they also beat Monaghan easily in 2014 before coming unstuck against Donegal who, like Tyrone now, had mastered the art of effective counter-attacking.

Asked if it will be important to get on top of Tyrone early, to draw them into a more open game, Gavin shook his head.

“I wouldn’t see it that way. Tyrone will always keep their shape. They will always have that counter-attacking style, whether it is the first minute or the 70th minute.

“They are still very good at exploiting that space that teams might leave and at putting up big scores. So whether you are ahead or behind them, it is always going to be a big challenge for any team.”

Gavin declared a clean bill of panel health for the first time this season.

Connolly is also back in his plans, though he pointedly refused to discuss whether the St Vincent’s forward will return to the team.“We just have to wait and see as we get closer to the game.”.