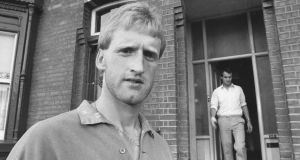 Prayers are being offered for the recovery of former Hurler of the Year Tony Keady after he was taken seriously ill in the early hours of Tuesday morning in Galway.

The GAA community in Galway, on a high after Sunday’s All-Ireland semi-final win over Tipperary, is in shock after word spread that the 53-year old had suffered an apparent heart attack at home in the early hours of the morning.

He was rushed to University Hospital Galway where he was being treated in the intensive care unit on Tuesday night.

Family members, friends and shocked former teammates called to the hospital throughout the afternoon and evening as word spread how seriously ill the double All-Ireland winner is.

He was taken ill at 4am on Tuesday morning and rushed to hospital.

The chief executive of Galway GAA, John Hynes, said there was widespread shock and sadness when news emerged that Keady was seriously ill.

“There’s a dark cloud over Galway, particularly the hurling community, and all we can do is pray and hope that he recovers. As one of his former teammates remarked earlier in the hospital, Tony was always a battler and we are just hoping he recovers.

“The news has shocked people, Tony is known and liked all over the place and he, like everyone else, was thrilled with the minors and seniors reaching the All-Ireland finals on Sunday,” said Hynes.

Keady was in attendance at Croke Park on Sunday as Galway saw off Tipperary and Kilkenny to reach the senior and minor finals.

An All-Ireland winner when Galway last triumphed in 1988, he won his first senior medal the previous year against Kilkenny but was controversially banned for playing in the United States in 1989 and missed the semi-final loss to eventual winners Tipperary.

His exploits in 1988 earned a second All-Star award and the Hurler of the Year crown and he played in a fifth All-Ireland final in six years when Cork defeated them in 1990.

Keady was only the third Galway man to win the Hurler of the Year award – Joe Connolly in 1980 and Joe Cooney in ‘87 were the others – and nobody from the county has won it since.

The Killimordaly clubman, who played a lot of his underage hurling in attack before switching to the half-back line, continued to be involved in hurling after he retired and trained several teams and was involved with the Galway U-21s.

He and his wife Margaret and their four young children live in Frenchfort in Oranmore where the former hurler works as the caretaker in Calansanctius College.

Ironically, the man of the match in Sunday’s success, Gearoid McInerney, is also from Oranmore and starred in the No6 jersey which Keady donned with such honour and glory in the 1980s.

McInerney is a son of Keady’s former half-back partner from the 1987 and ‘88 wins Gerry McInerney.

“He must have been thrilled to see the performance his successor delivered on Sunday,” added Galway chief executive Hynes.

“It was just like he produced back when Galway last won it. It’s terrible what’s happened after the high of Sunday and all the expectation towards the final but we are just hoping and praying that Tony pulls through this.”