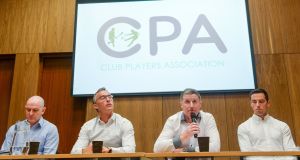 It was typical of the Club Players’ Association’s flinty resolve that they ignored any concerns about the timing of their fixtures launch on Tuesday.

Over the years it became gradually apparent to their inter-county counterparts, the GPA, that summer wasn’t a good time to launch initiatives because the attention available for off-field matters tends to wander as the championship heats up at this time of the year.

The CPA would probably argue that it’s not a particularly busy time for their membership, which brings the argument around to the business of their media event in Abbotstown.

The organisation has evolved since its launch last January when it laced its concern and indignation about the state of club fixtures with a pugnacity that needlessly created an adversarial edge to their unveiling.

That attitude has given way to a warier assessment of the environment in which they operate. There was a resigned acceptance that the GAA wasn’t going to greet their input with open arms and a frank acceptance that discussions with Croke Park were now at a standstill.

Most reflectively of all, they appear to have lost interest in securing official recognition from the GAA – the initial attempt at which required the considerable diplomatic acumen of former president Nickey Brennan to rescue from the clutches of a PR disaster at last February’s congress.

On Tuesday, chair Micheál Briody talked why the CPA now felt that it could go about its business just as effectively by being a lobby group outside of official structures. It made sense even if it would have meant something to them to achieve recognition even as a gesture that the gravity of their concerns were being acknowledged.

The mood music between the parties has been discordant. From the CPA perspective they see an organisation that although it talks a good game on addressing the need for ordinary club players to have settled fixture schedules around which they can organise the rest of their lives, takes decisions that constantly add to the demands of the inter-county season.

They feel any engagement on their proposals to be “tokenism” rather than “a real interest” and find some – but not all – official attitudes to be dismissive. This is despite their having drawn attention to the need for a Special Congress of the GAA to consider a) the dynamic between inter-county and club fixtures and b) the potential for hurling to be swamped by proposals for a round-robin in the All-Ireland football quarter-finals.

These concerns were rebuffed originally but a few months later there are new hurling proposals on the table for deliberation at a Special Congress.

Croke Park also had its gripes. The demand to stall and review GAA business now that the CPA had been formed was unsurprisingly seen as presumptuous. Exception was also taken to the way in which the work of the Central Fixtures Planning Committee was belittled and the impatient implication that if the will was there the matter could have sorted out by now.

There was frustration that discussions with the CPA could become overly discursive and range over a broader span of issues than the pressure group’s well-expressed central aim of ‘fixing the fixtures’.

Some of these antagonisms have subsided.

On Tuesday both Briody and Liam Griffin did acknowledge initiatives such as radically reducing the number of inter-county replays (that will from next year apply to only provincial and All-Ireland finals) and taking minors out of senior club activity as well as replacing the under-21 football championship with a purely developmental under-20 grade.

Their problem remained though that there was no overarching solution to the fixtures’ problem being proposed by Croke Park and that the incremental approach to championship reform was unfocused and incompatible with drawing up a sustainable fixtures masterplan.

The GAA could legitimately say that their approach has been piecemeal because the problem is piecemeal. That doesn’t merely mean that there are different elements that need to be dealt with but also that achieving change has always been incremental because the association requires a lot of leading.

Remember how often motions to repeal the GAA’s various controversial bans were brought to Congress only to be knocked back and submitted and resubmitted in the years that followed.

Take the more relevant example of the above mentioned rule on replays. Having been introduced, it was rolled back in 2011 and an attempt to reimpose a reduction was then defeated five years later before finally regaining acceptance last February. A few yards on Iwo Jima were more easily gained.

Look at all the reforms that have passed in recent years: the replays, the underage re-categorisation, the moving of the league finals to early April, bringing All-Irelands into August, untangling the junior football and intermediate hurling and the low-key practicality of training fixtures planners.

By next year for instance there will be 24 club-only weekends; last year there just 15.

As was mentioned at the CPA media conference on Tuesday, one of their core proposals, the calendar year for the All-Ireland club championship, has been on the agenda for a while now having been recommended by a high-powered Central Council work group, including the then president Liam O’Neill and Director General Páraic Duffy.

It hasn’t been implemented because Central Council isn’t convinced by the idea. This should be borne in mind when proposing – as the CPA do – that their three main principles, an exclusively club month in April, the calendar year for clubs and a complete close season in December “do not require a motion to go to congress and can be routed through Central Council”.

Delegates to Central Council still need to be persuaded.

On the face of it little appears to separate their other prescriptions. An April free of inter-county activity versus half of April and half of May free of it?

A positive development is that the CPA now accept the imperative to mobilise their membership or support base as a lobbying force whereas in January they appeared exclusively focused on engaging with Croke Park.

If they can influence their component counties it will be of huge assistance to ensuring reforms are accepted and equally importantly, implemented.

Croke Park and the CPA don’t have to be the best of friends to get things done.