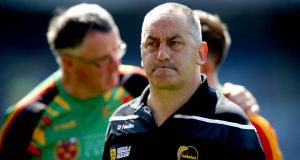 Like the buses: none for ages and then two at the same time. It is a testament to the GAA’s disciplinary procedures that the Central Appeals Committee (CAC) has developed the reputation as something of a Carlsberg Complaints Department but it still functions as we are reminded by two high-profile cases before it.

As it happens the one that was in the news last week, concerning suspensions for Cork hurler Séamus Harnedy and Kilkenny’s Conor Delaney, wasn’t really a disciplinary matter, as the suspensions themselves weren’t the issue – as opposed to when they could and couldn’t be served.

The fallout from the controversial Carlow-Down league match in Division Three is heading towards the CAC but given the imminence of championship it’s hardly surprising that manager Turlough O’Brien, coach Steven Poacher and senior player Brendan Murphy are challenging stiff suspensions of 20, 12 and 12 weeks, respectively for an assortment of Category V and Category III infractions – protecting referees from “threatening or abusive conduct” on the part of players and team officials.

In the case of O’Brien the Central Hearings Committee (CHC) actually imposed a heavier punishment than that recommended by the Central Competitions Control Committee (CCCC), 20 weeks against 16.

It’s hard to see the appeals having much effect, short of a cracker of a procedural irregularity, but given that the bans will severely compromise Carlow’s season, already troubled after a misfortunate relegation back to Division Four, it was probably inevitable that they’d explore that avenue.

It is also something of a trend, as the county has the worst record in both leagues for suspensions, nine football and 14 when hurling is taken into account.

Part of the bedrock of any disciplinary process – civil or criminal – is that it should be open and transparent. This gives the community at large, in this case the GAA, a clear picture of what is and is not acceptable, as well the methods by which the issues are adjudicated.

For a while now the GAA has not been fulfilling this fairly straightforward remit. After all the central disciplinary process is entirely within the association’s control and they could shape the way in which the story is told to their – and the membership’s – maximum advantage.

Instead the notification process has become random and sporadic.

Some of the difficulties aren’t of Croke Park’s making. The decision of congress, on a Cork motion, to stop the CCCC from releasing its decisions has contributed to a culture of covertness that unfortunately appears to have permeated even the decisions of the CHC.

In fairness to the appeals body, CAC, it was grappling with a fairly intractable case concerning the validity of a provincial council delegate’s status (seriously) on the same night as the Harnedy/Delaney appeal.

That wouldn’t have prevented a simple statement to the effect that the players had served their suspension in the Division 1A play-off in March with full decision to follow.

This is particularly so when it was such a curious decision given that the play-off to decide who was in Division 1A and 1B next year was clearly in the category of match that the rule book ordains can’t be used to serve suspensions; the GAA even asked Cork and Kilkenny did they want to play the otherwise meaningless fixture.

Given that CAC chair Brian Rennick is one of the sharpest rules interpreters the GAA have – his devastating dissenting opinion in the Diarmuid Connolly case from 2015 is the clearest rationale as to why that decision continues to be seen as the worst yet produced by the DRA – the full CAC ruling is awaited with interest.

There is no reason why every step of the process should not be flagged: how the CCCC have assessed the situation and if that is not accepted by the concerned parties, when the CHC will hear the matter and so on.

Arguing that keeping the recommended suspensions under wraps will ensure that the CHC isn’t influenced is daft. The proposed penalty may never be argued at a hearing but the dogs on the street know the recommendations as soon as they’ve been relayed to counties concerned.

The current protocol of not announcing the CCCC recommendations is actually unfair on the committee itself, which has done excellent work in the area of discipline. Its deliberations on referees’ reports and investigations are evidently seen as reliable and fair, as on this year’s records to date 72 per cent (59 out of 82) of the recommendations have been accepted.

Of the 23 that weren’t accepted, only seven received redress with six hearings resulting in no penalty and one in a lower penalty than the CCCC had proposed. One is still in process. The others divided between 14 imposing the same suspension as had been recommended and one, the Carlow case, a heavier punishment.

Only two cases of suspension have gone to the CAC, one involving Roscommon’s Ultan Harney, which failed and the Carlow appeals yet to be heard.

One further tweak to the system could usefully be made. At the moment, only the affected parties, such as players and officials, before the disciplinary committees are allowed appeal and look for arbitration. It doesn’t make huge sense that the GAA itself is unable to do so.

For instance even if the Harnedy and Delaney cases are on such an obscure point (only arising in years when there is a league re-organisation) that the issue may not ever arise again, there are circumstances in which CAC decisions could be referred for a final arbitration.

Otherwise, everyone either gets stuck with what sometimes are debatable precedents or has to go to the trouble of amending the rule book.