Oisin Kiernan: ‘The reason I didn’t go to the GP was because I wanted to play football’

Cavan county player on surviving testicular cancer, going to the GP and optimism 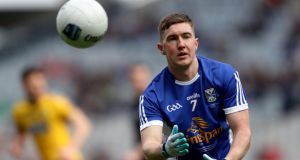 Oisin Kiernan: “Getting the all-clear was one thing but really what you want is to be back playing football.”Photograph: Bryan Keane/Inpho

Oisin Kiernan never had a sob story. Not when he landed into Castlerahan training one Friday night and kept his tracksuit on instead of togging out, the first hint most of his teammates got that there was something wrong.

Not when he went for the operation a fortnight later and had his testicle removed. Not when they won the first Cavan county title in the club’s history with him only allowed to wear a high-numbered jersey on the sideline.

Not through chemotherapy. Not when the hair went. Not when the appetite shrivelled and he was forcing himself to eat. It was all just a series of steps along the road. No choice but to take them.

He tells you this not to sound like a hero. Again and again as we chat, he stops and tries to make it clear that he’s not trying to show off or to sound like the whole thing was nothing. That’s not who he is. Instead, his point is that so many people had it worse than him and so many people continue to suffer. He was lucky. That much, he knows.

How lucky? The timescale alone tells the story. Back in mid-August, he found a lump. More a ridge than a lump, in fact. But something, anyway. He was a man about it for a few weeks, which is to say he ignored it and did nothing, before eventually going to get it checked out by a GP. A scan the following morning saw him diagnosed with testicular cancer. That was Thursday, September 13th 2018.

Six months and 11 days later, he came off the bench in Breffni Park as a second-half sub for Cavan against Dublin in the Allianz League. He went in at wing-back on Kevin McManamon, himself only shortly on the pitch as a replacement for Paul Flynn. Kiernan went to face him up for their first possession and McManamon promptly twisted him inside out with a dummy solo and left him for dust.

“All I could think was, ‘Welcome back!’” Kiernan says now, delighted at the thought of it. “It was great to get back. Just to prove to myself that this wasn’t going to stop me. I just wanted to get back playing because it meant I was able to go, ‘That’s the end of it now.’ Getting the all-clear was one thing but really what you want is to be back playing football.”

Oisin Kiernan grew up in Co Meath. Well, sort of. His family are pig-farmers and the homeplace was in Ballymanus on the Meath/Westmeath border. At school, his friends were Meath lads and Cavan lads and Westmeath lads. He was a handy enough player growing up – hardy and athletic and decent with his feet.

But whatever you’d call the bit of the county he came from, nobody ever mistook it for fashionable. He got a run with the Meath under-21s at one stage, played a few years with the county juniors as well. When he was 23, he did his cruciate and was out for seven months. When he came back, he fell in with Castlerahan in Cavan.

Not for any particular reason. He knew a few of the Ballyjamesduff lads from school and it seemed as good an idea as any. Once he got back to full fitness, he became a keystone in the Castlerahan defence. They made the Cavan county final in 2017, their third in a row. It ended in defeat, also their third in a row.

By the following January, he was making his debut for Cavan, scoring a point from wing-back against Clare in the league. He cemented his place through the campaign, played every minute of the Division Two league final and started all four of the games in the summer. In a year of limited enough progress for Cavan, Kiernan was roundly hailed as a pleasing addition to the squad.

I had nothing wrong with me whatsoever. I felt 100 per cent and that’s why finding the lump didn’t bother me

In the early rounds of the county championship, he was the stand-out player in the competition. So much so that despite not playing in any of the knockout rounds, he made the Anglo-Celt team of the championship when it was all over. By then though, he was headed for the Mater.

“I got the operation and I was hoping that would be it. I was back training before the county final. The doctors wouldn’t let me play but I was allowed to to go out for it. I had to go and get scan results the day after the county final to see was there anything left after the operation. I probably should have been taking it easy but sure it was the first county title in the club’s history so I couldn’t miss that.

“The next morning then, they told me I’d need to go for chemo. The cancer had spread to my lymph nodes - there was about two centimetres of it that had to be got rid of. So that was that. Four rounds of chemo starting a fortnight later. That suited me because it meant I could play in the Ulster club championship against Coleraine.”

And so he did. They said he could so he did. Played the full 60 minutes too, a big chunk of it on a Castlerahan side that was down to 14 men after an early red card. His tongue was hitting his chin by the end of it on account of having little enough proper training done over the previous month but he got through it all the same. Most natural thing in the world.

He was helped by the fact that his father had been down this road before. Down it, up it, around it, through it. Back in the 1990s, he’d overcome testicular cancer twice. When Oisin was eight, his father went to the US for treatment for bowel cancer. About eight years ago he came through a fourth bout, this time with kidney cancer. He’s still trucking away, since you ask. Dairy farming these days mostly.

And so Oisin had a frame of reference for it all. It wasn’t nothing. Cancer never is. But it could be handled, treated. The physical side of it, he handed over to the doctors and nurses in the Mater. A week at a time, five days on the ward, first fluids at seven in the morning, last bag of chemo emptied into him around mid-afternoon. The quiet cancer grind, dutifully washing the stuff through and letting it do its bit.

Mental side of cancer

The mental side of it, he took on himself.

“I was allowed out in the evenings so I could go and do what I wanted. I’d go for walks or go and see friends. They’d say be back before eight but I’d come back around 11 or 12 and nobody said a word about it. I went to the gym a few times so I was happy enough.

“I went on the first Wednesday and then another time as well. I wrapped a bit of tape around the yoke on my arm that the chemo went in through and went and worked away. There’s a Flyfit in Drumcondra, across from St Pat’s and I went to a Ben Dunne down beside the Jervis Centre the next time. Just to keep going.

“The nurses were saying I was mad to be doing it but the doctor said to belt away and to push it. I’m not saying that to be showing off, now. I’m just saying that was what’s possible. That’s the way it’s going now with cancer treatment. Years ago, they used to think you should just rest completely. But he was happy for me to push it if I could. Lying around wouldn’t be good for the head.”

He had two sessions before Christmas and two more after it. All the way through, he kept going to Cavan training and did what he could. His last chemo session was on Wednesday, February 6th. Usually after a full week of it, he was wrecked for a few days. This time around, the adrenaline shot he got from having finished it out meant he went and took full part in Friday night training.

“I’m lucky. I know that. You talk to other people and they’re not so lucky. There was another young lad in the same time as me and he had the same thing as me but when he got his results, it had spread to his lung. I do realise how lucky I am for it to go the way it went. I got it early enough.

Tomorrow lunchtime, all going well, he’ll line out for Castlerahan for the first time since that Ulster club game against Coleraine back in November. It’s a league match against Cootehill and it won’t decide a single thing of any great importance. And still he’ll lash away at it, as if it’s the biggest thing in his life.

Which it is, of course.