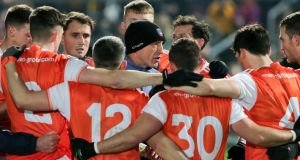 Armagh manager Kieran McGeeney with his squad. The club is training at the Browns Complex in Vilamoura ahead of their Ulster Championship quarter-final. Photograph: Philip McGowan/Inpho

Armagh are once again on a collision course with GAA authorities, after defying a rule forbidding training camps after the National League and before a senior championship game.

The squad and manager Kieran McGeeney left for Portugal on Tuesday morning, where they will be staying in the renowned Browns Complex in Vilamoura. They will return on Sunday night after a few days of gearing up for their May 19th Ulster Championship quarter-final clash against Down in Newry.

Interestingly, all senior club fixtures have been emptied from the schedule for this weekend in the county, for an Easter break.

That it is Armagh again defying Rule 6.22 of the GAA’s Official Guide, which states, “senior inter-county panels shall not be permitted to go on training weekends, or training of longer duration, after the final of their respective National League having been played, except during the 10 days period prior to a senior Championship game, or during the 17 days prior to an All-Ireland senior final”, is surprising.

They were found guilty of such an indiscretion last year, along with Laois footballers and both of Wexford’s intercounty squads. The punishment was to lose out on the first home league game of 2019.

However, given that Armagh were ordered to play the round two league game against Clare in Newry – where they also face Down in a few weeks’ time – they might have felt the punishment was not enough to deter them for a second time.

Last year Armagh returned from their training break to the same venue and the day after their return, assistant manager Jim McCorry stated at the Ulster Championship launch: “We arranged under the proper guidelines to be heading away at this time. Four weeks was our target prior to the Championship game to give us that four days of intensive work.”