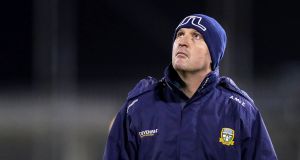 Andy McEntee: “If you get the decent performances, chances are you’re going to get the results. That’s the way we’ve approached it.” Photograph: Laszlo Geczo/Inpho

Third time lucky – or maybe lucky 13th time around, depending on who exactly is keeping score. Either way it would require some considerable bad luck for Meath to fall short of promotion to Division One of the Allianz Football League next weekend.

A win or a draw would suffice in their final round match against Fermanagh at home in Páirc Tailteann in Navan on Sunday. They currently top Division Two with 10 points, and such is their healthy points difference, Meath would still need to lose by more than 18 points, and Donegal would need to beat Kildare by more than 15 points, in order for them to miss out.

It’s been a slow and twisting road back to the top flight. Meath were relegated from the old Division 1B back in 2006, with the likes of Graham Geraghty still on board, and have fallen either short or a little long of promotion back to Division One in the 12 seasons since. Hence the luck of the 13th time around.

For Meath manager Andy McEntee, in his third season in charge, it’s perhaps third time lucky. McEntee saw Meath fall just one place and one point short of Division One in 2017, losing out to Galway and Kildare; last year they ended up fifth after a season repeatedly interrupted by postponements and refixtures, which didn’t do their rhythm or momentum any good.

“That consistency was the real challenge for us last year,” says McEntee. “And we would have sat down at the start of the league this year, and said ‘look, it’s not a four game league, it’s a seven game league, and can we challenge ourselves to get seven decent performances?’

“That’s been the goal as much as anything, because if you get the decent performances, chances are you’re going to get the results. That’s the way we’ve approached it.”

After an opening round win over Tipperary, Meath then fell to Donegal, in Ballybofey, 1-13 to 0-14, although rather than a setback, McEntee looks back on that game as a turning point.

“The funny thing is you could argue our best performance all season was in those first 60 minutes against Donegal. We were as good as we have been, I think, and were on the verge of winning that game with probably a bit to spare, and then unfortunately a goal goes in, and that result certainly put everyone under a bit of pressure.

“But the response was exactly what you would like to see, everyone dug in. A 60 minute performance against Donegal, and then a 10 minute spell where we didn’t perform, shouldn’t put us off track, and it didn’t.

“We recovered in the next round and got a good result against Armagh, and again in the next round against Cork, and then obviously Kildare. I suppose the Kildare result is the one most people are still talking about, but every two points in this league are very hard fought, very hard won, and our response to that reverse against Donegal has been pretty good really.”

If anything has set Meath apart this season it’s been that spirit. They came into 2019 off one of their worst championship showings of recent years: two games, two defeats.

They lost their Leinster quarter-final to Longford, 0-16 to 0-14, then lost their first round qualifier to Tyrone, in Navan, 2-14 to 0-19, after extra-time, Tyrone going on to make the All-Ireland final against Dublin.

Without jinxing Sunday’s game, or indeed his luck, does McEntee feel Meath are primed to take on the likes of Dublin and Tyrone in Division One in 2020?

“Are we ready? We won’t really know until we’re in there with the big boys, and playing them on a regular basis, but it’s certainly something that we’ve talked about, a goal that we set ourselves all along. Right now it’s very much in our own hands, and if we put another performance together, then chances are we will find out whether we are ready for it or not.”

Truth is McEntee has never been shy about the prospect of playing Dublin, suggesting too many counties concede a psychological advantage before the ball is thrown in.

Meath after all are still the last county to actually beat Dublin in the Leinster football championship, nine years ago this summer, in the 2010 Leinster semi-final, hitting them were it hurts with five goals to none (5-9 to 0-13).

This season McEntee, who managed the Meath minors to Leinster and All-Ireland finals in 2012, and also Ballyboden St Enda’s to a first All-Ireland club title in 2016, has managed to get players back on board, most notably Páraic Harnan and Mickey Newman after a year away from the squad.

Summerhill forward Barry Dardis is another addition, trying out in goal for a while, but sticking mainly outfield, his injury-time penalty securing a dramatic victory over neighbours Kildare in round five.

“Yeah, we’ve had a number of new players on the panel, and on any given day have started two or three new players, and they’ve performed pretty well all along, the likes of Ronan Ryan, Darragh Campion, Ethan Devine, they’re all new to the panel. But we’re getting consistent performances out of anyone.