Double bill of hurling and football league finals under consideration 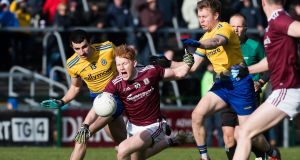 The final day of the regulation league season sees all matches start at the same time and postponements are only approved when the fixture in question can’t affect the division’s promotion and relegation outcomes. Photograph: Evan Logan/Inpho

The GAA are believed to be looking at the possibility of staging both league finals on a double bill at Croke Park on the last weekend of this month. If that proves impractical, however, it is likely they will be played on the same day but at different venues.

That is because hurling counties have been traditionally reluctant to play big matches on Saturdays even though increasingly, championship fixtures – including one of last year’s All-Ireland semi-finals – have been played on that day.

Whereas no firm decisions can be made until the finalists in both football and hurling emerge from next weekend’s fixtures, it has already been announced that the two finals will take place on the last weekend in March.

This came about because of bad weather that adversely affected the last round of regulation matches in the hurling league, which was due to conclude with its final next Sunday but the schedules have been knocked back a week.

The most obvious issue is that the finals of both Division One and Division Two of the football league traditionally take place as a double bill on a Sunday, with the Division Three and Four deciders on a Saturday.

For the hurling league final to take place on a double bill with the football, the Division Two football final would have to be moved and that might not go down too well with the counties involved, who are yet to be confirmed. There is also a possibility that there will be a vacancy on Saturday because of a potential postponement of the Division Three final.

Pressure for the hurling to be played with the football would intensify if Galway were to reach both finals – an outcome that requires the hurlers to defeat Waterford and the footballers to get something from their trip to Omagh to play Tyrone.

Even if that outcome doesn’t materialise there remains a possibility that such a double bill could happen.

One outstanding issue that needs to be resolved could have a bearing on the Central Competitions Control Committee’s deliberations. Last Saturday the Division Three fixture between Louth and Westmeath couldn’t go ahead and despite contingencies that any matches called off would be played on either the Sunday or Monday of the bank holiday, it was announced that that wouldn’t happen with this fixture.

This was because both Louth and Westmeath have a number of gardaí playing for them and they were required for duty at various St Patrick’s Day events on Sunday whereas for Louth players working across the border, Monday wasn’t a bank holiday.

This creates a problem for the CCCC, who meet on Tuesday and will have to decide whether or not to defer all of next weekend’s Division Three fixtures, which would see the divisional final pushed back. The final day of the regulation league season sees all matches start at the same time and postponements are only approved when the fixture in question can’t affect the division’s promotion and relegation outcomes. A win for either Louth or Westmeath would push them into a promotion place so the result would have a direct relevance.

· Dublin forward Paddy Andrews sustained a broken jaw after coming on as a replacement in Saturday’s league match against Tyrone. The injury occurred in a 48th-minute challenge by opposing goalkeeper Niall Morgan, who was yellow-carded by referee Jerome Henry.

· The death has taken place at the age of 78 of former Westmeath footballer Mick Carley, regarded as one of the county’s best and most distinguished players. His inter-county career spanned three decades from the late 1950s to the 1970s and he won Railway Cup medals at centrefield with Leinster in 1961 and ’62.