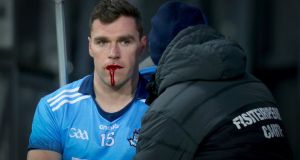 Confirmation that Dublin forward Paddy Andrews sustained a broken jaw during Saturday’s Allianz Football League defeat to Tyrone rules him out of action for at least six weeks – including next month’s rounds of Dublin club football fixtures with his club St Brigid’s.

However, with Dublin not starting in the Leinster football championship until Saturday, May 25th, when they play the winners of Louth and Wexford, Andrews should be back on the field in that time.

The injury was sustained in the 48th-minute challenge, when Tyrone goalkeeper Niall Morgan ran directly into Andrews after coming off his line; Morgan was yellow-carded by Mayo referee Jerome Henry, which in turn meant the GAA’s Central competitions Control Committee could take no further action.

Andrews was only on the field for some 12 minutes, having replaced Cormac Costello on 35 minutes, but was immediately replaced by Kevin McManamon after the incident.

Morgan took to Twitter to say he had been in contact with Andrews to state there was no intention to injure, and that he “never before and never will go out to harm another player”.

1 Pete Sampras: The forgotten great with the best serve in the business
2 The unsolved mystery of Goran Ivanisevic’s stunning Wimbledon win
3 The Game Changers: Vincent O’Brien, a pioneer who took Irish racing to the world
4 John O’Sullivan: IRFU must recognise vital role of clubs in rugby's return
5 Tipping Point: DeChambeau’s transformation raises questions, but who will ask them?
Real news has value SUBSCRIBE