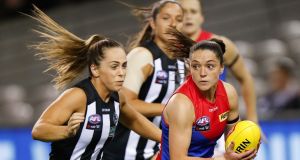 In the end, Sinéad Goldrick only had about two hours to pack up her life and go. There had been weeks of uncertainty as to whether the 2020 AFLW season would be played out to its conclusion and even the official moves to bring a decision one way or the other had just created more doubt. Goldrick and her Dublin team-mate Niamh McEvoy were with the Melbourne club, unsure as to what to do next or even what could be done. This was just last Tuesday.

“It was all really up in the air,” she says now. “The AFLW actually put out a tweet saying it was just going to be a straight final between the top team in the two conferences. But that turned out not to be the case and they deleted it about an hour later and said that they’d announce the following day what the structure was going to be. It was all very uncertain.

“While all this was going on, our club came to us and said they’d spoken to the embassy and taken advice on it. And their attitude was that basically, their first thought was for us as people. They wanted us to go home while we could. They didn’t want us getting stuck there, away from our families at a time of such uncertainty in the world. It really reflected Melbourne’s culture as a club. They care a lot about us as people.”

Even so, she was reluctant to just up sticks and high-tail it home. She and McEvoy had both taken a while to find their feet in the new sport but they were getting there. Though the competition would be cancelled by the weekend, Melbourne were still contenders for the overall title when Goldrick and McEvoy were deciding whether or not to go home. In the end, the club pretty much made the call for them.

“I spoke to four or five people in the club – the CEO, the coaches, the medical people. And they just felt that was the best thing for us. I think a lot of people who talk about the Melbourne set-up, they talk about culture a lot. It was one of the reasons I went there in the first place and everything I heard going in has been borne out. From the very start, when I couldn’t even kick properly, the patience and understanding and kindness they showed me was phenomenal. I was really sad it had to end this way.

“As an athlete, I wanted to stay and play. I wanted to contribute to the team and try to give back what they gave me in my time over there. But they took that decision for me. I don’t know if there was a right or wrong way to go, it’s not the sort of situation you can plan for. But their instinct was to look out for our wellbeing and to get us home to our families.”

Once the call was made, it was last helicopter out of Saigon time. They’d made friends and connections throughout the club but there was very little time for any of that. Airlines were being grounded all across the world, borders were being closed. Like everyone else, they had no real idea what the picture would look like in a week or even a day. So in a fingersnap, it was over. Her life got flipped, turned upside down.

“I had to pack and go within two hours really,” Goldrick says. “We weren’t sure were we going to leave at all or leave that day and then, all of a sudden, we were rushing to the airport. So it was a bit mad. There was a big massive queue in the airport, we were standing in line for three hours to check in. And then when we got to Abu Dhabi, we had 10 minutes to make our connection. So we were racing through the airport there.

“And then we got home and I went to Dunnes to get a few things and straight away, you saw the social distancing and everyone wearing gloves and all that stuff. They’re not doing that in Melbourne yet but they will. It’s not the same there yet but it will be getting to that stage.”

It wasn’t supposed to end this quickly and definitely not this way. On Saturday night, she stayed up late to watch Melbourne nick a late win against Cora Staunton’s Greater Western Sydney in front of empty stands at the Sydney Showgrounds, qualifying for the last four. On Sunday, the AFL suspended the men’s game for six weeks and in the same breath killed off the women’s season altogether. Goldrick is back in Dublin, home for Mother’s Day, getting used to it all like the rest of us.

“When you’re away and you get that time alone to reflect on things, you learn a lot about yourself and what’s important to you. As an athlete, sport is everything. But when things like this happen, it does make you reflect a bit and see what you want from yourself.

“I think you refocus and maybe you don’t have quite that tunnel vision that you had before. It’s not all about performing the best you can or winning a cup. It’s about your wider health and the health of those around you. I’m home with my family and my mum and dad are delighted. They’re not worried about me being on the other side of the world or anything like that. So that’s a great thing.

“I just have to figure everything out now, between work and Dublin and everything. Dublin were very encouraging for me to try it this year and to experience it, I don’t know what the feeling will be next year. Obviously I wouldn’t have gotten the opportunity if it wasn’t for Dublin and my club so I owe them a debt of gratitude on that to begin with.

“But it’s so hard to know right now. You get so absorbed and sucked in by something and you have to step out of it for a while to see where you are. Who knows where we’ll all be by the end of the year?”

Nobody does. Nobody can.