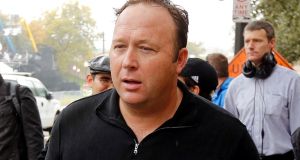 It was largely lost in the growing panic over the rapid spread of Covid-19, but when the World Health Organisation warned that the virus was not just a pandemic but an “infodemic”, it was telling us something important about the psychological battle in which each of us is locked.

We first heard of the virus last year as a threat apparently confined to China. In a few months it has consumed all before it: there’s now largely no other news, no other topic of conversation globally. “Normality” is a thing of the past, perhaps a thing of the future – but for the moment it is gone.

That maelstrom of the abnormal is the perfect environment for those who deal in disinformation.

In a reflection of what’s gradually been emerging as a newly bipolar world characterised by the battle for “Great Power” dominance between the United States and China, that relationship too has been the “ground zero” of the Covid-19 infowars.

The most toxic of the conspiracy theories so far has been that the virus has been artificially created and weaponised by a nation state.

The first such story was that it had been genetically engineered as a bioweapon in the Wuhan Institute of Virology, the very laboratory that enabled China to identify the deadly pathogen as a “novel” form of coronavirus, in other words a form not seen before.

Virologists and epidemiologists are confident, however, that Covid-19 was not artificially created. The WHO points out that China shared the genetic sequence of the new coronavirus on January 12th – the single most important step in allowing the development of targeted diagnostic responses.

Since then, however, there have been multiple variations on the same conspiracy theme.

Chinese foreign ministry spokesman Zhao Lijian suggested on Twitter that members of the US military may have introduced the virus to China during the World Military Games last October – and that America has been refusing to come clean.

There have also been claims that the US created the virus to contain its geopolitical rivals not just in China but in Iran as well.

The escalating claims and counterclaims led US secretary of state Mike Pompeo to hit out at Chinese “disinformation” while President Donald Trump again raised the stakes by speaking about “the Chinese virus” – causing fury in Beijing.

Down the food chain from the White House, it’s happening too. Trump supporter and president of the Christian evangelical Liberty University in the US, Jerry Falwell Jnr, suggested that Covid-19 could be the “early Christmas present” that North Korean leader Kim Jung-un famously promised the president.

The world is a small place online and there have been countless hoax cures, many of them making money on the basis of “tribal” endorsements.

Former televangelist Jim Baker has attempted to sell a product named Silver Solution as an antidote. Far-right radio host Alex Jones has been told by the New York state attorney general to stop promoting a sham anti-coronavirus toothpaste. Even in Ireland, colloidal silver, usually marketed as a dietary supplement, has a certain following.

Hackers have been at work too. A malicious website posing as the invaluable Johns Hopkins University live map of the outbreak has been infecting visiting computers with the AZORult malware, which steals a range of sensitive data.

Tha has been copied in the Netherlands where the website of the Public Health Institute (RIVM) has also been faked, forcing the institute to correct false figures and the defence department to deny that the army was on standby to keep people off the streets.

According to reputable Dutch cyber security company Cybersprint, there are more than 22,000 registered websites featuring the key words “covid-19” or “corona”, a high proportion of which are fraudulent in one way or another.

Disinformation may sometimes seem mischievous rather than actually dangerous.

That’s when clarity and consistency are at a premium.