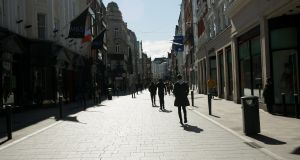 Footfall rates in Dublin city centre have dropped by almost 66 per cent over the past week due to the Coronavirus concerns, according to research by business organisation Dublin Town.

The number of people on the city’s streets plummeted progressively as the week went on and businesses shut their doors, with footfall down by 37.5 per cent by Monday March 16th and 77 per cent by Saturday March 21st.

The research showed the streets with a high concentration of hospitality businesses were most affected. South William Street recorded a reduction of 85 per cent while Grafton Street saw a reduction of 75 per cent in its footfall. This translates as approximately 200,000 fewer people visiting the city centre each day, the organisation said.

“This is an unprecedented event, starkly illustrated by the dramatic decline in city centre footfall. St. Patrick’s week is traditionally the beginning of the tourist season and one where it’s all hands on deck for many in the hospitality sector. However, this year many businesses within the industry had their doors closed,” Dublin Town chief executive Richard Guiney said.

“Many of our members are small, family owned independent retailers, restaurants and bars. Right now their ability to get through this is dependent on their cash reserves and personal savings, but few have sufficient reserves to stay afloat for the prolonged period of several months that this crisis may last for.

A large number of the city’s “customer facing” businesses had chosen to close their doors in the interests of the health and welfare of both customers and staff, Mr Guiney said.

Others providing “essential retail” such as supermarkets and pharmacies, as well as restaurant preparing hot meals for takeaway and delivery, were continuing to operate while exercising responsible social distancing, he said. However, the majority of Dublin Town’s 35,000 retail and hospitality workers have already been temporarily laid off or are facing a very uncertain future, he said.

“The current emergency is first and foremost a health crisis and the preserving life has to take precedence over all other considerations. However, we must also do everything in our power to ensure that the economy is ready to rebound rapidly once it is safe to do so. Central to this is assisting employers to retain their skilled and talented workforce. This will require innovative schemes similar to some of those developed in other jurisdictions where employers and the state combine to provide a living wage for those forced out of work.”

He asked that the public continue support city businesses were possible.

“Many Irish retailers have developed their online services, while restaurants are engaging in takeaway and delivery services. Traders have noted their appreciation of members of the public buying vouchers from them. Such support from the public in these very difficult times is greatly appreciated by all concerned. We are in this together and can emerge successfully where we continue to have a collective effort.”

Dublin Chamber of Commerce said the footfall numbers tallied with its own feedback from businesses, and similar declines were evident in shopping centres around the city.

“Footfall and trade levels could probably best described as Sunday morning levels. A large number of shops are obviously closed. Consumers seem to be focused on buying essentials, and turning to online for anything else,” Dublin Chamber head of communications Graeme McQueen said.

Online shopping was providing “some comfort” for those retailers who have had to close their doors, but who have a web store, he said.

“Dublin Chamber is encouraging Irish shoppers to support local businesses at this time by looking to buy online from Irish websites. This will help keep Irish firms going and also protect jobs,” he said.

“The longer this goes on, of course there’s a fear that some firms won’t survive. That’s why it’s really important that affected firms are aided by Government. In particular, it’s vital that firms get relief from commercial rates. Rates are a big cost for many firms, particularly small businesses, and a relief window could prove to be the difference for them over the coming months.”

Crude oil prices have plummeted. Why not prices at the pump?