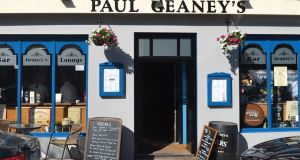 Paul Geaney’s in Dingle: A whole industry was put to sleep at the flick of a switch. No time for contingencies, no space in which to come up with a plan. Geaney had to let 20 staff go.

The crisis has demolished all certainties at an impossible pace. Sunday week ago, Paul Geaney had the store room of his Dingle pub packed to the roof, all his pre-St Patrick’s Day ordering done and stacked and ready to go. It was in or around lunchtime that the Sweet Caroline videos from Temple Bar started doing to the rounds. By midnight, he was shut down.

Four days previously, his football life had been put on hold every bit as suddenly. On Thursday morning, the GPA had been in touch saying the GAA was exploring the possibilities of playing games behind closed doors and asking would players be up for it. By early afternoon, it was all moot anyway. The season was stopped, like pausing Torc waterfall halfway down the rocks.

A whole industry was put to sleep at the flick of a switch. No time for contingencies, no space in which to come up with a plan.

Geaney had to let 20 staff go and get all their paperwork done in the hope that they can find some bit of a soft landing. It’s for the common good and everyone accepts there was no other way of doing things. Still a brutal, bloody kidney punch of thing to have to take, all the same.

“Obviously there’s a lot of frustration within the industry that it has been shut down,” Geaney says.

“It’s nearly always the first thing to go in any of these situations. When the smoking laws came in, it was the right move. But it disproportionately hit publicans. The we suffered again in the downturn because going out is the first thing people look to save on.

“And now, it’s the right move again obviously for the health of the country. But it has hit publicans quicker than other industries and it will take longer to come back from. The tourism industry in general is really preparing for the worst now. Best-case scenario, when you look at the countries that have been hit hardest like China and Italy, you’re probably looking at three or four months of a closure.

“Maybe we’ll get back before that but I don’t believe we’ll be open again in a fortnight or three weeks. I don’t think anybody thinks that. I would think that in about a month or six weeks, people will be allowed back into offices and other industries will start to get on their feet again. We’ll come after that.”

The thing with running a pub is that the pint settling on the bar counter or the roast dinner served up to the corner table is the last link in the chain. Take it away and everything that goes before it melts like spring snow. It took Geaney a week to empty out the store room, to freeze what food he could save for again, to clear the cold rooms and the walk-in fridges.

He had to sweet talk his suppliers and get them to hit pause for a bit with the promise he’d be back when everything got going again. They in turn had to do the same with the farmers and factories and creameries and breweries they deal with, who in turn had to make arrangements with their own workers. Even those who had taken out insurance against something like happening are having trouble getting their policies honoured.

So everything bad trickles down. And everywhere is its own special case. Geaney’s pub has been doing well over the past few years because the tide has been high. Between the 2018 heatwave and the strong American economy, running a bar in Dingle has been a grand way to make a living. When he does open again, the landscape will have changed beyond recognition.

“The thing to remember is that Kerry is so susceptible to a downturn in tourism. Obviously it’s been booming in the last couple of years but as a destination, it’s completely vulnerable to a downturn. Particularly a rapid downturn like this. You look at our main customers – it’s the US.

“They’re going to be months behind over there, maybe a couple of years before life is back to normal. The UK would be a big customer as well and they’re months behind too. I would imagine the knock-on effect will run to this time next year and longer.”

In the meantime, football is there, somewhere. He hasn’t forgotten about it but he isn’t out kicking the ball off a wall for hours on end either. His hands are full most of the day anyway with three-year-old Páidí hopping about the place. But when he can do a bit, he does a bit. It’s all you can do.

“For the time being, it’s a matter of living day to day and trying to keep fit,” he says. You think about football the odd time but it’s not really there to anywhere near the extent where it usually is.

“I presume Croke Park are working on contingency plans but it’s a very grey area so it’s very difficult to give it any real thought. I suppose when you’re an athlete you want to tip away all the time but anything that’s going to happen is definitely a couple of months down the line.

“I’ve a bit of gym in my garage so I’m getting out there a small bit and I go for a couple of runs during the week. But it’s going to be testing for a lot of guys on the inter-county scene and the club scene as well as the weeks go by. The first week or two, it’s a kind of a novelty but trying to gear yourself up for it on your own is going to be difficult.”

Tough times ahead. On all fronts.