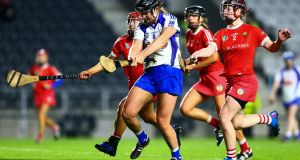 When Littlewoods Ireland dropped their brand new “Style Meets Substance” promotion for this year’s camogie leagues, it felt like something big was going to happen.

Camogie must have felt incredibly left in the shadows and unable to capitalise on the wave of support for women’s sports over the few years, and recently, players have come out expressing concern frustration over why their game is lagging behind.

Take Cork camogie player Amy O’Connor. Last January, after the 2018 low scoring All-Ireland final between Cork and Kilkenny, O’ Connor said that the game was boring to watch and boring to play in. While some deemed her quotes to be a tad controversial, many soon followed to voice their concern about the state of the game.

With hand pass goals and no physicality allowed in a game that could turn into a free-taking contest, many agreed something had to change. The 2017 and 2018 All-Ireland finals were so dull, the scoreline barely flattered the winners and when the most viewed match of the year becomes the national conversation on referees and rules, then you know there’s trouble. Change was badly needed. And then, the Galway v Kilkenny All-Ireland senior final happened.

The game was the resuscitation camogie needed. Galway versus Kilkenny was so fiery, carefree and exciting, it began to restore everyone’s faith in the game.

By half-time, the combined score had exceeded that of the 2017 final and come within one point of the 2018 one. By the end, the game produced the highest winning score since Tipperary’s 4-13 against Kilkenny in 2001.

So, camogie got the fillip it needed, but many wondered whether the association was ready for change. Was there enough of an itch to match “the greatest game ever” hurling while also capitalising on people’s appetite to showcase a women’s sport that showcased, skill, physicality, raw talent and more importantly, the excitement needed to draw you in, while keeping you entertained throughout.

And kudos to the Camogie Association, they duly obliged. The most significant rule change is probably the contact rule, while among other things, hand pass goals are also culled.

With women’s strength and conditioning now at an all-time high, ironically for so many years, the sport that uses sticks never allowed contact. And as women’s sports benefit from the experienced crossovers from the men’s games, it was time to allow the game to develop. Perhaps 2020 really is new year, new camogie.

Now, admittedly, I feel like a film critic that goes to a movie once and writes the report as soon as possible, rather than thinking the whole thing through and trying to provide some context. But the excitement was incredibly real in Páirc Uí Chaoimh last Saturday night as the camogie league commenced with Cork versus Waterford.

While I fell foul to #ShanahanWatch (energetic Dan Shanahan is now coach for Waterford camogie), the physicality complimented the skill show in front of a decent crowd.

Referee Ray Kelly let the game flow (sometimes too much if you were on #ShanahanWatch who continues to clock up the steps on his FitBit during games) and ensured that the game ran smoothly. While some big hits drew oohs and gasps from the crowd, it was a significant change from the deep sighs and frustrations that sucked camogie’s atmosphere and really the life from the game.

In truth, time will tell how these trial rules will fare. While the general consensus is these rules received a warm welcome and that the future of camogie is now, the rule changes will not be discussed on a permanent level until 2021 Congress. After years of players voicing their frustration and feeling forgotten about, maybe now is the time the change will come.

While ladies football continues to grow and become the more dominant of the two sports, eventually, maybe camogie, if permitted, will flourish under new guidance and be pointed in a direction that promises growth and more importantly fans, spectators, sponsorship and revenue.

While the men’s game dominated conversation afterwards, the camogie curtain-raiser did show a whole new future for camogie. Big hits that make promos all the more exciting, skills that drew widespread applause and cheers and highlight reels that would encourage every girl to pick up a hurley.

It’s a long season yet and as the old saying goes nothing is won in January. But, if camogie can pick up a steady pace over the next few months and consistently have good, free-flowing games, then maybe it will become a great sport again.