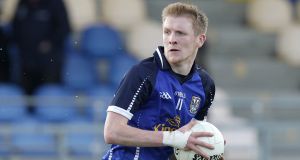 Christopher Conroy scored the winning goal for Cavan in the game against Westmeath. Photograph: Morgan Treacy/Inpho

A cracking Cavan crew put a dismal first half behind them to leave Westmeath marooned at Kingspan Breffni on Saturday night in Division Two of the Allianz Football League.

The Blues trailed by 0-3 to 0-8 at the interval but ignited a brave comeback with a five-point unanswered tally at the start of the second half.

Searching for their first points of the season, Mickey Graham’s side sealed an unlikely victory when Christopher Conroy’s fisted effort found the Westmeath net in the 72nd minute.

The visitors were left simply shell-shocked at the death having enjoyed a numerical advantage from the 25th minute to the 66th minute.

Neighbourly relations went out the window in the first half as three black cards (two to Westmeath) and a red card (Cavan’s Paddy Meade) were dished out by referee Seán Laverty.

Fluid football was scarce but in open play Westmeath were the more cohesive, hungrier and purposeful.

Cavan were dismal early on and it wasn’t until the 22nd minute that they scored their second point with Oisín Pierson converted a free to make it 0-2 to 0-6.

Things went from bad to worse for the Blues when corner back Paddy Meade received a straight red card for an off-the-ball tackle on Westmeath’s Callum McCormack in the 25th minute.

Cavan owed much to their amazing comeback to the introduction of half-time subs Thomas Galligan and Stephen Murray, who both pointed to level matters, 0-8 apiece, after 42 minutes.

Westmeath hit back with interest though with sub Luke Loughlin goaling in the 43rd minute with his first touch of the ball at the end of Westmeath’s first attack of the second half.

For good measure, man of the match Ciarán Brady put the final nail in Westmeath’s coffin with another gem in the dregs of injury time.

O’Brien well set to land a 10th Vertem Futurity 16:09
IRFU will charter plane for women’s team to France 16:11
FA won’t punish Jordan Pickford for challenge on van Dijk 14:37
Jordan Larmour ruled out for 16 weeks after shoulder surgery 13:10
‘Final eight’ could return for Champions League from 2024 12:02
Crossword Get access to over 6,000 interactive crosswords