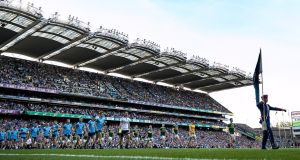 ‘We will march blindfolded into a competitive structure whereby the All-Ireland Final will be played between franchised teams. Could you imagine the Connacht Warriors playing the Munster Rebels?’ Photograph: Billy Stickland/Inpho

Connacht secretary John Prenty has described the ever-increasing cost of intercounty preparations as a “runaway train” and also warned against the march towards potentially franchised teams such as the “Connacht Warriors and the Munster Rebels”.

In his report to Thursday evening’s annual convention at the Connacht offices in Claremorris, Prenty singled out the rising costs of the five county committees within the province over the last decade.

In 2010, the total expenditure of the committtees came to just over €6 million; by 2014 it hit €7.5 million; by 2019 it had effectively doubled from 2010 to almost €12 million. According to Prenty, almost 60 per cent of this total goes on the intercounty game, despite catering for just over 1 per cent of the playing population.

“At the beginning of the decade, 2010, the country was in the midst of a deep recession following a number of years of excessive spending by the people of Ireland,” Prenty said.

“Have we, as an Association and our county committees, in particular, learned anything from the excesses of the past? It appears from the evidence of the past 10 years that we have learned very little. Our counties have slowly increased their expenditure, year-on-year, due in the main to copycat tactics and the mistaken notion that we must keep up with the perceived expenditure of so-called successful counties. An examination of the total expenditure of our five county committees in the past decade clearly has the warning signs flashing again.

“This runaway train shows a 100 per cent increase between 2010 and 2019. A further analysis of the expenditure shows that, after direct and indirect costs are taken into account, almost 60 per cent of the expenditure has been on the intercounty game which caters for just over one per cent of the total playing population who are involved at the elite intercounty level. The copycat tactics of the county committees is driving the Association into the realm of elitism, commercialism and investment in the few over the general good of the Association.

“If we do not stall the runaway train then many of our counties will not be financially viable, some will no longer compete at intercounty level and we will march blindfolded into a competitive structure whereby the All-Ireland final will be played between franchised teams. Could you imagine the Connacht Warriors playing the Munster Rebels? It is time to rebalance our actions, confirm our amateur status and ensure that our culture and ethos is diverted away from elitism, which is leading us on a dangerous path.”

The Gaelic Players Association (GPA), Prenty suggested, also needs to play a more active role in addressing player demands and welfare: “The demands of intercounty team managers and players is increasing exponentially to the point that they must train more, have more professional staff involved and consequently we must spend more.

“Recent reports of the ESRI highlights the demands being placed by the intercounty game on the players, to the point that they claim that it is a burden on them to play the game and that the demands of their team managers is becoming too much. This is a game, a pastime that players and officials should enjoy.

“Surely the GPA, as the voice of the players, must have a role in addressing the welfare of their members by engaging with the team managers to ensure that players are not being burnt out and that the demands being placed on them is balanced.”

“No matter what expectations our players, officials and supporters have there is one thing that we should not forget . . . the future success of our counties cannot be dependent on spending more! ‘Liam’ or ‘Sam’ are not for sale. The best players always win out in the end.”

Prenty’s concerns are also mirrored in the report of Munster secretary Kieran Leddy ahead of their annual convention in Ennis on Friday: “Close on €8 million was spent by the counties of Munster in preparing their various intercounty teams in 2020, and that was up by €1.3 million on the previous year. Clearly, this level of expenditure is unsustainable.”

While Munster’s overall income remains relatively unchanged, the fall in football gate receipts is significant, from €910,555 in 2018 to €549,128 last year. This mainly due to the drop in attendance to just 18,265 for the Cork-Kerry Munster football final in Páirc Uí Chaoimh.

The Munster hurling championship, however, showed another increase in revenue to €4.2 million, up from €4.05 million in 2018.