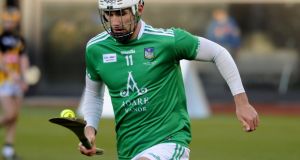 A yellow sliotar in use last year during a game between Kilkenny and Limerick in Queens, New York. Photograph: Emily Harney/Inpho

Any proposal to introduce a sin-bin in hurling would in part be motivated by the need for as much coherency as possible within the GAA rule book.

According to Pat Daly, GAA director of games development and research, a proposal to introduce the 10-minute black card punishment which now applies in football should also be considered for hurling based on evidence and not sentiment.

The GAA’s Standing Playing Rules Committee is expected to propose the sin-bin for hurling, possibly as soon as Congress at the end of this month, along with a number of other proposals for both codes.

“The overriding principle is to have a set of rules for football and for hurling that have as much commonality between the two as possible” says Daly. “Otherwise it can lead to confusion.

“A lot of referees are dual referees, and have one set of rules for one game and a different set of rules for another game, and in actual fact as the games develop internationally one of the things I encounter is where there is a common set of rules for hurling and camogie, not withstanding the differences around physical contact, and the same with Gaelic football and ladies football.

While previously trialled in football before being written into rule, the sin-bin has yet to be tested in hurling. However, it would be based around the same set of cynical fouls such as deliberately pulling down an opponent and remonstrating aggressively with a match official.

“Anything we’ve done we’ve tried to do it on an evidence basis, as distinct from sentiment,” says Daly. “If we’re doing something here is the evidence to back it up – that’s the basis of our work for the last number of years. And it’s incumbent on someone to do that.

“Opinions are opinions, and that’s fine, but if there is evidence to suggest something then I think it is incumbent on people to look at that, and say ‘do we need to address something?’

“It still has to go to Central Council, and could take a while yet, but ultimately we do need to have as much coherency as possible between all codes.”

Daly also updated on the status of the new yellow “smart” sliotar still on course to be introduced for the start of Championship 2020.

The new yellow sliotar is designed to help clear up some disputed scores. It is easier to see and follow from both a player and spectator point of view, and is considered easier to judge from an umpire’s perspective when deciding whether or not it has passed through the white uprights.

“It’s still a live issue. There are still a number of things we have to work through in terms of supply chain, and we haven’t quite got that pinned down yet,” says Daly.

“We should have more clarity on that in the next number of weeks, but we’ve more or less completed all the testing and are happy enough we have what we need.

“Championship starts in May, so it’s difficult to say can we iron out the issues before then. So there are a number of hurdles still before we can say ‘this is definitely going to happen’.

“But it’s going to happen at some point for a number of different reasons, but as was the case with HawkEye, it takes some time to make sure it’s ready to go.

“And all the evidence and feedback indicates that [yellow] is the preferred colour. It happened with tennis moving from white to yellow. All the research in the field would say that’s the colour to work with.”

The yellow sliotar has been used already in certain instances, such as the Super-11s hurling games played in the US, where the players involved suggested it was easier to see and follow.

Tennis introduced the yellow ball as standard for Wimbledon in 1986, with improving television viewing a factor there.

Also part of the sliotar research and development project is to improve standardisation by inserting a small microchip into the ball. Unlike the HawkEye brand, a camera-based system of score technology, the microchip in the sliotar, for now at least, is purely for standardisation and control purposes, a sort of technological trade mark of approval, especially in the playing of official games.

Of continuing concern for Daly, meanwhile, is the problem of Chalara fraxinea – more commonly known as ash dieback, a rampant, fungal disease that can effectively spread like wildfire.

Some 350,000 hurleys are manufactured in Ireland every year, over half of which are made of imported ash. However, supply from home and abroad has been reduced as the disease has been spreading since 2012, and Daly is working on a resistance strain of ash as a way of addressing the problem.