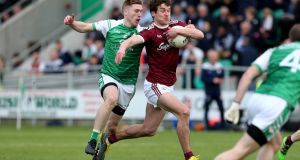 Galway were pushed all the way in Ruislip on Sunday before finally securing their opening round Connacht SFC quarter final victory against a brilliantly organised London.

The contest had promised a mismatch but from the moment London’s Killian Butler goaled on 25 minutes, the Exiles were right in this contest and finished the afternoon encouraged but disappointed having missed some brilliant opportunities to tie the game in the final minutes.

With 13 English-born players on their panel, Ciaran Deely’s side frustrated a Galway team who though imperious in certain facets, were less than clinical in other areas.

And it was Butler who found himself on the end of that glorious chance in the dying minutes following a lightening London counter. However, he dragged his shot across goal as Galway held on for the most unconvincing of victories.

“It’s the first round of the championship and always a tough assignment coming over here,” said Galway manager Kevin Walsh, whose Sligo side were famously beaten by London in 2013.

“London were very well set up in fairness to them. It will be Tuesday night when we say what we really have to say. The amount of silly turnovers and missed opportunities left us where we shouldn’t be.

“We gave away a very bad goal and went in level at half-time, and the next 10 minutes we totally dominated all the kick-outs.

“Ridiculous hand passing and ridiculous score misses [made it a difficult afternoon].”

Curiously, Walsh’s charges sat off London during the opening quarter. Galway amassed behind the ball when not in possession and it wasn’t until the midway point of the half that the Tribesmen started to play with more fluidity.

Thomas Flynn was dominating the Ruislip skies and he and midfielder Michael Daly registered two points in as many minutes to put them 0-4 to 0-2 in front.

That kickstarted a Galway scoring burst, with Antaine O’Laoi converting a superb effort from out wide for their fifth points in 11 minutes, and suddenly a regulation win looked on the cards.

But London finished the half on fire, largely due to Butler’s brilliant strike. The corner-forward collected Fearghal McMahon’s inside pass, left his marker Sean Andy O’Ceallaigh on the deck and buried a shot to the top corner of Ruairi Lavelle’s net.

With London captain Liam Gavaghan to the fore, they deservedly went in level at the break - 1-6 to 0-9 - thanks to two late points from their top-scorer Conor Doran.

However, their good work was undone within seven minutes of the restart as Shane Walsh’s move out the field field paid dividends. He began to dictate proceedings, spraying some lovely passes across the paddock, and chipped in with two of their four points without reply to make it 0-13 to 1-6.

Again, Galway should have kicked on but again, they didn’t. Walsh’s 42nd minute point was their last from play as they failed to capitalise on their dominance from kick outs.

Johnny Heaney’s late miss summed up Galway’s performance. Having carved out a goal chance, he opted to fist over the bar, only for the ball to drift wide, and moments later at the other end Butler should have drawn London level.

Walsh then landed an insurance point in injury time.

“At end of day we have a game under our belt we are into the semi-final stage and it’s good to get a good run out,” said Kevin Walsh.

His London counterpart, Ciaran Deely, said he was encouraged despite the result.

“We were competitive in every game in Division Four and we were a bit unlucky not to win a few more games,” said the Wexford native.

“We have a sound defensive system and also we have got a bit of flair in attack and we were quite confident that if we got our shape right, our tactics right, that we could push on and really put it up to Galway.”