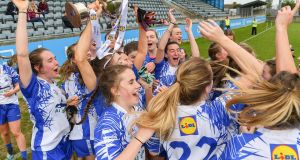 These teams will meet again next Saturday in the TG4 Munster championship and this was a huge psychological boost for Waterford ahead of that game.

Waterford were outstanding in the first-half and they ran up a 4-8 to 0-8 half-time lead, with goals from Michelle Ryan, Kelly Ann Hogan, Maria Delahunty and Eimear Fennell.

Aileen Wall grabbed a deserved goal in the second-half for Waterford and despite the best efforts of Hannah O’Donoghue and Louise Ní Mhuircheartaigh, Rosie Landers’s goal remained intact until the game was over as a contest and Lorraine Scanlon scored.

Waterford went in front inside the opening minute when Delahunty scored a point and three minutes later they took control after Emma Murray gave the pass and Ryan drove low past Robyn White and into the Kerry net.

Louise Ní Mhuircheartaigh scored Kerry’s first point in the fifth minute but Waterford scored 1-1 again, this time Chloe Fennell pointed and then Hogan broke through the cover and outpaced Anna Galvin to rifle her shot high into the net.

It was 2-2 to 0-1 in Waterford’s favour after just seven minutes, and despite scores from Hannah O’Donoghue, Miriam O’Keeffe and Amanda Brosnan, Waterford kept their composure.

They added an unanswered 1-4 between the 16th and 23rd minutes. Points from Róisín Tobin (two) and Delahunty were followed by a devastating third goal when Aileen Wall’s pass was palmed to the net by Delahunty.

It was now a massive 3-7 to 0-4 advantage and the teams traded scores until Wall sprinted through and Eimear Fennell finished off a fourth goal for the dominant Déise.

Ní Mhuircheartaigh and Sarah Houlihan scored the last two points of the half but Kerry trailed by 12 points at the break.

Waterford banished any thoughts of a comeback on the resumption with quick-fire points from Katie Murray and Delahunty. Houlihan and Fennell went point-for-point but Kerry needed goals and after O’Donoghue doubled her tally she saw her goal bound effort stopped on the line by a cluster of Waterford bodies.

Kerry’s hopes were dashed when Wall scored a fifth Waterford goal after Eimear Fennell’s shot crashed off the crossbar in the 47th minute.

Scanlon finally scored a Kerry goal eight minutes later, when O’Donoghue crossed and she bundled the ball past Landers, but that was only a consolation.