‘The desire is there, the hunger is there so to question those things is crazy’ Tyrrell said 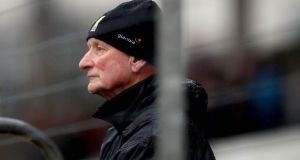 Kilkenny manager Brian Cody in the stands after being sent off during last week’s league clash against Wexford. Photo: Ryan Byrne/Inpho

Former Kilkenny hurler Jackie Tyrrell has described it as “nonsense” the idea that Brian Cody’s time at the helm of the Cats is coming to an end.

Speaking on Added Time: The Irish Times Sports Podcast, Tyrrell responded to an article in the Irish Independent that Cody should leave his position by saying that there are plenty of mitigating factors to Kilkenny’s unconvincing start to the league season and that his former manager has not lost an ounce of his passion or desire for the job.

“Kilkenny are down an awful lot, whether it be retirements or injuries,” Tyrrell said. “So that’s the hand Brian has been dealt at the minute and he’s trying different things.

“The fight is in Brian. You see him in the Walsh Cup final – the desire is there, the hunger is there so to question those things is crazy. It’s not like he’s got his full strength at his disposal and it’s not like he’s not up for the fight.

Tyrrell won nine All Ireland titles with Cody as his manager and believes that, as he has done so many times before, the Kilkenny manager can rebuild once again and take his new team to similar heights.

“Brian is the manager and it’s a fresh challenge for Brian and Brian will relish this. How many times has he developed and brought a new team through? You can see that already in the new guys he’s bringing in.”

Also on today’s show, Gordon D’Arcy was in studio to look ahead to the Six Nations and Ireland’s opening game against France on Saturday with Gerry Thornley in Paris also offering his opinion. There’s also some Superbowl mtalk and much more.

1 Gerry Thornley: Stoppage could tip balance in favour of big money teams
2 Increase in membership a plus for adapting golf clubs
3 FAI council member raises concerns about governance of organisation
4 Royal Portrush: Golf clubs ‘in real distress’ as eyes turn to 2021
5 Colin Kaepernick’s exile is too fresh for NFL to speak out on US protests
Real news has value SUBSCRIBE