David Clarke not giving up being number one with Mayo 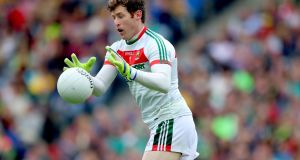 David Clarke: “You try to recover well, but any day you get to play Kerry is a big one, especially in Castlebar under lights, so looking forward to it. .” Photograph: James Crombie/Inpho

Nothing is won or lost on the last Sunday in January but statements can certainly be made. For Mayo goalkeeper David Clarke it is loud and clear.

At 34, Clarke is, by about three weeks, the second oldest player on the Mayo football panel after Andy Moran – although his involvement with the senior team goes back longer than anyone, to 2001, when he first joined the panel as a 17-year-old.

When in the immediate aftermath of their latest All-Ireland defeat to Dublin last September and the word “retirement” was being bandied about, Clarke’s name was inevitably mentioned: he’d more miles on the clock than anyone, and more importantly owed Mayo nothing more whatsoever.

Only his goalkeeping in 2017 had been impeccable, earning him a nomination for an All Star and the Footballer of the Year award, alongside team-mate Andy Moran, and Dublin’s Stephen Cluxton and James McCarthy. He missed out on the latter but sealed the All Star, edging out Cluxton – some said controversially – to become only the sixth goalkeeper in All Star history to win that position back-to-back.

All Star positions will always be debated, although there was no denying Clarke’s consistency in 2017 – especially against Cork, Kerry and Dublin. Only what is driving him in 2018 is not the past, but his desire to retain the number one jersey for as long as he can, and with that end Mayo’s quest for that elusive All-Ireland. He wouldn’t have come back unless he believed Mayo could still challenge for that title. The word “retirement” was never once mentioned in his head.

“Nah, once the body was good, I was going to be there, just competing for that place,” says Clarke. “There are three goalkeepers in there again, great competition for the places, and I’ll be hoping to keep my position for as long as I can.

“We’d a new baby as well before Christmas, but once you’re lucky to be in the team, still competing as well as we are, it’s hard to step away. We have a very good medical team, and a very good strength and conditioning team. I’d probably do a bit more pre-game, and pre-training, but you never know when it’s going to end, so happy enough at the moment.”

The Ballina Stephenites man was first-choice goalkeeper ahead of Rob Hennelly for Sunday’s opening round win over Monaghan in Clones. They have swapped back and forth in recent years, most infamously for the 2016 All-Ireland replay against Dublin, a tactic which backfired when Hennelly’s kick-outs malfunctioned, and he later conceded a penalty. Clarke regained the number one spot last season and hasn’t looked back, never once making an issue about being dropped for that replay.

Clarke’s own game, however, continues to evolve: the new rule whereby goalkeepers must kick-out the ball over the 20-metre line during restarts got its first proper testing over the weekend.

“It’s a bit of a change alright, and the weather this time of year can play a bit part as well. The heavy conditions can make if difficult enough to go short, but it’s a new aspect of the game. And only the second game that I’ve played in where the new rule applies, so it will take some getting used to.

“And given the size of men we have around the middle it’s no harm. But the whole thing is different now to when we started out. I certainly wouldn’t be cutting any corners, and probably do a bit more pre-hab before games.”

Mayo’s opening round win over Monaghan on Sunday, thanks to a 74th minute injury-time winner from Paddy Durcan, made a few the statements. Moran scored their opening point and is clearly intent on making the most of 2018, while Eoin O’Donoghue from Belmullet demonstrated his promise at corner back, and likewise Neil Douglas from Castlebar Mitchels at corner forward,

“It was a tough game, so very happy with the result,” said Clarke. “It’s actually quite a few years since we won our first game of the league, but there are a lot of pleasing aspects to the game too.

“The first half was quite good, we worked hard on kicking the ball, shot selection. And especially the way we finished as well, getting a couple of shots off, there was no giving in, and it was great to get the win.

“And no goal chances for Monaghan at all really, so I think we worked hard all round. They had a few wides alright, and maybe a few too many frees, but overall we’d be happy enough alright. We’d a couple of men extra in the end, but kept on the ball well, kept moving it into position, and in fairness to Paddy [Durcan] it’s a shot he’s well capable of taking, and he executed it very well.”

This Saturday evening, Kerry make the trip to Castlebar, and win or lose, there are probably some statements to be made there too.

“It’s always one week at a time in the league, especially with the six-day turnaround. You try to recover well, but any day you get to play Kerry is a big one, especially in Castlebar under lights, so looking forward to it. Should be a big crowd. And the support we get is still great, anywhere we go, and when you think about the amount of money they spend to follow us you really appreciate it.”

1 Philip Browne admits funding model for Irish rugby is not sustainable
2 BBC to show four live Premier League games as restart set for June 17th
3 Dave Hannigan: Trump gets the clubs back out as death toll keeps rising
4 Dr Bob Rotella: ‘If you focus only on the target you’ll play darn good golf’
5 Sideline Cut: Vignette shows why Bird is the true shark in The Last Dance
Real news has value SUBSCRIBE