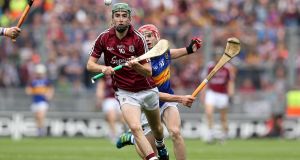 Brian Concannon scored a goal on his senior debut for Galway against Antrim in Salthill. File Photograph: Ryan Byrne/Inpho

After a winter enjoying their All-Ireland victory, Galway were a long way short of their best in their first outing of 2018, but Micheál Donoghue’s side finished strongly and avoided a shock league defeat to Antrim at Pearse Stadium.

Conor McCann’s 40th-minute goal gave Antrim the platform to build from, but they only hit one point in the last 18 minutes and Galway kicked on to victory.

Without any competitive action since last September’s All-Ireland final win, Galway can be forgiven for this sub-par showing, while the four games Antrim had under their belt certainly added to their challenge.

“We knew coming into the game we were a bit behind and you could see it in the performance but you’d have to give a lot of credit to Antrim, they came down really focused and really put it up to us today,” said Donoghue.

Galway played into a very strong wind in the first half but despite being overplayed, they managed to lead 1-9 to 0-11 at the interval, thanks largely to a goal a minute from the break from Brian Concannon in his first Galway appearance.

With Neil McManus in superb form from open play and from placed balls, Antrim slowly built their way back into the game after Conor Cooney had pushed Galway to a 0-6 to 0-2 lead after 12 minutes at the other end.

A McManus free after 14 minutes was added to brilliantly by Gerard Walsh on the sideline, while McManus hit a great score from play to push Antrim to within a point of their hosts.

Paul Flaherty and Niall Burke pointed for Galway either side of Nigel Elliott’s point, but four of the next five points went to Antrim as they punished plenty of sloppy Galway play.

Concannon’s goal from a tight angle gave Galway a lead they scarcely deserved at the break, but McCann hit back after the restart to restore Antrim’s advantage.

In their best period of dominance Antrim fired four points in the next 11 minutes, which gave them a three-point lead to defend, but Neal Peden’s men couldn’t add the insurance score they needed.

Instead Galway upped their intensity as sub John Hanbury and Éanna Burke settled the Tribesmen and defender Hanbury levelled matters with six minutes to go.

And in the closing minutes Galway finished off their Ulster opponents and two more subs, Davy Glennon and Cathal Mannion, pushed them on to the win.