‘People get confused, it’s a hobby. Other stuff comes first; travel, work, whatever’ 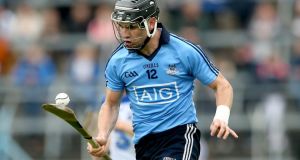 Dublin’s Danny Sutcliffe: “I knew [Pat Gilroy] had changed the culture of Dublin football when he came in and I knew he probably planned to do that in the hurling as well.” Photograph: James Crombie/Inpho

It’s four years since then Dublin manager Anthony Daly underlined the value of 22-year-old sensation Danny Sutcliffe to the county.

Speaking after Sutcliffe sniped 1-5 from play against Kilkenny in a crucial National League game, having missed the loss to Waterford in the previous round, Daly noted the player’s impact.

“He’s a really good one,” said Daly, nodding enthusiastically. “He’s a big loss to us when he’s not there.”

Nobody would have predicted it at the time but Sutcliffe wasn’t there for all of 2016 and 2017 under Daly’s successor, Ger Cunningham, and Dublin’s form dipped in tandem.

Now Pat Gilroy is in charge and attempting to pick up the pieces though Saturday’s 13-point defeat to Offaly, albeit with a team of greenhorns, highlights the scale of the task.

Sutcliffe didn’t play in that match though is hoping to feature in Antrim on Sunday, his first league game since beating Limerick in the 2015 quarter-finals.

The expectation among Dublin supporters was that he, along with the others who declined to play for Cunningham, were certain to return under new management though the St Jude’s man shook his head.

He played football for New York in last year’s Championship and might have remained in the US if it wasn’t for tighter visa controls imposed under President Trump’s administration.

“Any other year, you probably would have got an 18-month extension on your grad visa but that wasn’t available with Trump and all of that,” said Sutcliffe, who didn’t spend his two years pining for a Dublin return.

“It wasn’t on top of my list. At the end of the day, people get confused, it’s a hobby. Other stuff comes first; travel, work, whatever.

“But I suppose I couldn’t say no when Pat Gilroy rang, with the setup he was putting together. I was just privileged to get the chance to be involved again. I wasn’t going to pass it up, especially with my age, coming into the wrong side of my 20s.”

Sutcliffe, Conal Keaney, Peter Kelly, Joey Boland, John McCaffrey and Alan Nolan are all back on the Dublin panel having left, or been dropped, under former boss Cunningham. Sutcliffe said that the timing of Gilroy’s appointment coincided neatly with his visa difficulties in the US.

“I just didn’t have an opportunity to stay,” he said of his New York stint. “Pat offered me the chance to come into the set-up. It wasn’t anything else, or anything more than that. I’m on the panel. I’m just trying to contribute.

“I knew he had changed the culture of Dublin football when he came in and I knew he probably planned to do that in the hurling as well. He’s obviously a very successful man off the field as well. And I knew he had Mickey Whelan with him, who is held in high regard in Dublin.

“I was just chatting away to him on the phone, probably wasn’t even chatting about hurling and he just said when he was starting back. And that was it.”

Anyone who suspects Sutcliffe might be just passing through, or who doubts his commitment, should consider that he was training at 6am yesterday morning, a regular Gilroy routine throughout winter.

“It all depends on how well I’m playing, I’m just taking it as a year, and you don’t know what his plans are either, you can’t think that far ahead,” he said. “It’s obviously a project but Sunday is all we are thinking about now. It’s every week really, you can’t be thinking that far ahead, you miss out on the present then.”

Sutcliffe admitted it was disappointing that Dublin failed to kick on and develop as a team after winning the 2013 Leinster title, the year he claimed his All-Star, though declined to apportion blame to Cunningham or his management.

“I was more worried about my club and what was happening there, we had six or seven lads away so that was more getting my attention,” he said. “You’d obviously be chatting to them [Dublin players] here and there, but you could probably weigh up as much as I could what was going on, it wasn’t going well for them. But it’s over now, they are just happy to be out of it and happy that we have a good group back together. We all want the same thing.”

Danny Sutcliffe was speaking at an AIG sponsored event in Dublin.