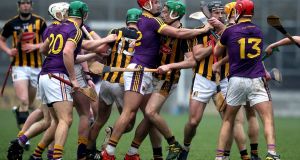 ‘I was at the Walsh Cup game between Kilkenny and Wexford last Saturday – the crowd was going spare. The blood was up in everyone. Games just take on a life of their own.’ Photograph: Ryan Byrne/Inpho

How do you take it handy in the league? How do you get that balance between going bull-headed for everything and keeping something back for later in the year? Can you even really do it? More than ever before, this year’s league is going to be about answering those questions.

Before now, you’d always have one or two teams trying to go at three-quarter speed in the league. It seemed to make a fair amount of sense in theory but I was always intrigued by how it worked in reality.

Some years Waterford would leave Tony Browne, Ken McGrath and John Mullane to come back in at their own pace and although it was obvious what the thinking was – keep them fresh for championship – I wondered what the knock-on effect was for the rest of the group.

It looked to me like it was basically telling everyone else that you had no interest in winning the league. That’s a ready-made excuse to let standards slip even just a little bit, no matter how good your attitude is. How do you crack down on that when it’s obvious that you can live with a few bad results?

Also, if you had no interest in winning the league, then you were heading into championship with no concrete knowledge of what your level was when you were playing your best stuff. You’d be going into the summer guessing, basically. That’s grand until you meet a team who spent the league finding out for sure what their strengths and weaknesses were. By then, it’s usually too late.

In Kilkenny, it was never up for discussion. There was no such thing as taking it handy for the league. You went out to win every ball, every game, every league, every competition. You went out, first and foremost, to win the jersey and then to hold onto it.

I can safely say we never, ever took it handy. The way the league was structured, especially in the past few years since it went to a six-team Division 1A, there was no opportunity to take it handy. All managers wanted to go as far as they could, to get as many good games against strong teams as possible ahead of the championship. You always wanted to get to a league final because it would be played at close to championship pace.

But with all the changes this year, I don’t see that as a realistic approach any more. It was always the case that the championship hung over the league like a shadow – but the shadow never looked this big or scary.

Every county has four championship games in five weeks starting in the middle of May. Wexford, Offaly, Tipperary and Waterford have four in four. And when they come out the other side, they’ve still only just reached a provincial final.

With that looming in their future, managers have to ask themselves what’s the upside of going all out to win the league. If you get to a league final, you will have played eight games in nine weeks. That brings you up to March 24th and that gives you just six weeks to get everyone recovered and relaxed, to shake off all the niggles that come from playing that many games in such a short space of time, leave them off to play whatever club games each county has scheduled and then wind them back up to full pelt for the helter-skelter of championship.

It has to bring about a different approach. Counties will be more restrained. There will be conservative playing time for key players, more squad rotation. Panels will have to be bigger. Strength and conditioning coaches will be more important than ever. Above all, players will have to recalibrate.

But how do you do that? That’s the crucial thing from a player’s point of view. I always had a mental note that come Valentine’s Day, it was the start of the hurling year. Forget the Walsh Cup, waste of time. Not that I wasn’t putting it in January, but the league meant bigger teams coming to town, bigger crowds, more exposure – and there were no excuses. The cobwebs had been blown off at that stage.

If in January you missed a rise or a catch, if you slipped or got tired, you would be just about forgiven. Not when the league started. There were higher demands and expectations. It was fine marking a chap in a Walsh Cup game from a college, some lad 19 years of age who was half afraid to go for the ball on a wet day in Freshford. But not when you had a Galway or a Cork or a Tipperary in Nowlan Park.

So romance was never a lovely spa weekend away for me the second weekend of February, it was spent chasing some whipper-snapper around some mucky pitch. But that’s where I wanted to be and it made me feel alive. I just don’t know how you change your mentality to mind yourself or try to play at 80 per cent.

Let’s say you do. Let’s say you’re a corner-back and you go out in your first game this weekend and you decide you’re going to ease yourself into the year. That’s fine, as long as the lad you’re marking has the same idea. But what if he’s trying to impress his way into his manager’s thinking? What if he has 1-2 scored at half-time? Never mind your grand plans for the year, pride takes over at that point and you swear to yourself going out for the second half that he isn’t getting a sniff.

It’s such dangerous territory for a player to get into. Multiply that by 30-plus panel members and it becomes even more dangerous territory for a manager. He has to be so careful about the messages he’s sending out. What’s he going to say to you once when you’ve conceded your 1-2 by half-time? “Yeah, I know I said not to be killing yourself Jackie but I didn’t mean just let him walk around you . . . ”

He won’t stand for it. The crowd won’t stand for it either. I was at the Walsh Cup game between Kilkenny and Wexford last Saturday – the crowd was going spare. The blood was up in everyone – Davy, Brian, all the players. Lee Chin came on and Conor O’Shea was giving him a bit of niggle so Chin pulled the hurl off him and kicked it away into the stand. These games just take on a life of their own.

And God help you if you’re live on Eir Sport or TG4. You let your man walk in for 1-2 in the first half of a TV game and you can be sure Twitter will have you retired by the time you come out for the second half. All because you tried to go at 80 per cent for a league  game in January.

Given all the work you’ve put in, given how fit you are, how strong you are, given the lifestyle you’ve imposed on yourself to play intercounty hurling, how then are you going to be happy with going at 80 per cent in the next game? Even if it’s on management orders, I actually don’t think it’s humanly possible. I think it would feel like a virus inside you.

That’s why I think this has to be the most difficult season inter-county managers have ever had on their plate. They need to track all of their players’ work-loads, training loads, moods, injuries, niggles as they go along. They need to arrive at the middle of May with everyone not only injury-free but also fresh and mentally ready to go as well.

Because trust me, what’s coming down the tracks in the championship is going to be brutal. With Kilkenny, we had one season where we played four games on four successive weekends and we were in tatters by the end of it. In 2013, we drew with Dublin, lost the replay, beat Tipp in one of the most intense games of our lives and beat Waterford after extra-time.

By the end of those four weeks, we were mentally and physically banjaxed. A load of us had knocks of one sort or another, getting patched up from week to week. We were doing no training, just recovery. No real time to reflect back on the game just gone, head down and get into the headspace for the next one. The stress of it – on body and mind – was unlike anything we’d ever experienced.

That is the reality all teams and managers have to prepare for as they make their way through this league. Everyone is stepping into the unknown. It will be fascinating to watch how they handle it.

1913: The year the GAA really started to get its house in order 06:00
Ken Early: Champions League has stolen international football’s clothes 06:00
‘A radical departure’: Who are CVC and what are their aims with rugby? 06:00
The strangest fishing club in the US and the huge pike that bit a schoolboy 00:00
GAA’s return-to-play draft road map to be published in the coming days 22:00
Crossword Get access to over 6,000 interactive crosswords