Rugby or Hurling? For Ronan Lynch, the choice was simple 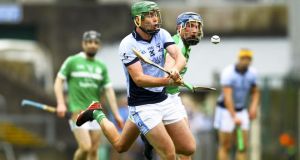 Ronan Lynch in action for Na Piarsaigh in the Limerick SHC Final against Kilmallock at the Gaelic Grounds in Limerick. Photograph: Ken Sutton/Inpho

There may well be some promising young hurlers in Munster who watched with envy as Darren Sweetnam made his Ireland rugby debut against South Africa last Saturday. Only Ronan Lynch is not one of them.

Like Sweetnam, Lynch was equally deft with the rugby ball as the hurl as a teenager, but when it came to making his preferred choice of sport there would only be one winner.

“No regrets, no,” says Lynch. “Playing hurling was always the easy decision for me. I’ve always had that pure love, really. I completely believe there’s just a total magic around hurling, the people involved, how passionate they are about it.”

Unlike Sweetnam, who grew up in Dunmanway, a part of Cork not known as a rugby stronghold, Lynch is from the Na Piarsaigh club, on the northside of Limerick city, where rugby is often seen by many as the preferred sport. While Sweetnam’s switch to rugby came relatively late in his career, having played county senior hurling with Cork at 19, Lynch realised quite early on that rugby would have to take a backseat to hurling.

“I played rugby in school up to Junior Cup level, at Ardscoil Rís, and also with Shannon. I played every sport growing up really, rugby, soccer, hurling and football. Limerick is a real sporting city like that.

“I had to make a choice around that time, 14 or 15, after the Junior Cup, but it was an easy choice. Hurling was always my first love, rugby the second. But I had to make a choice, playing county minor with Limerick, Dr Harty Cup with the school, under-16 with the club, and at the same time the training regime with the rugby was becoming much more hectic, going into Senior Cup as well. So I had to make that decision. The study too comes into play.

Again, there are no regrets, not even when seeing Sweetnam on the international stage last Saturday, and the professional sporting career he has carved out for himself.

“There are plenty of households that have to sit down and make that decision, and fair play to Darren Sweetnam who has went on to have a fantastic career, hurling for Cork as well. He’s obviously a very talented individual, he made that choice, and thankfully it’s working out for him.

“And would I have gone on to play for rugby for Munster? Jeez, I don’t know if I was that good. But these decisions are made, the same with a footballer being contacted from Australia. That’s a huge opportunity, to go Down Under, or do you stay? Deciding between sports like that can be difficult, but at the same time you’re lucky to have the choice. Some people would give their right arm to be talented in one sport, but it was always going to be hurling for me.”

Still only 21, Lynch’s rewards are by now also lucrative, in the strictly honorary sense: he first hurled minor for Limerick at 15, winning under-21 All-Ireland titles in 2015 and again this year; in 2016 he was also on the Na Piarsaigh team that become the first Limerick club to win a club All-Ireland hurling title.

“Yeah, when we won our first county title, we won our first Munster title straightaway, and you think maybe that’s a lucky break,” says Lynch, who scored 0-15 in the semi-final win over Blackrock.

“When it’s 10 games now, and still ongoing, you have to say that’s pure consistency, in that particular championship anyway. We haven’t been as inconsistent getting out of Limerick, but once we get into Munster, it’s the fear of losing, really, wanting to win.”

What will drive Lynch far beyond Sunday is that longing to win an All-Ireland senior with Limerick, last achieved in the county in 1973.

“There will always be a belief in Limerick that we can succeed, no matter how long that gap is. The players are there. Now whether another All-Ireland club title will springboard the county success is hard to tell, because it’s a totally different ball game. Even the under-21 success, it is very difficult to keep young players at their peak.”

A student at the University Of Limerick, in design and manufacturing engineering, he also sees firsthand some the high praise and renown which follows the Munster rugby team. Not that he sees it taking from Limerick hurling.

“The only pressure I feel is the pressure I put on myself to succeed, that want to be the best. Sometimes you can expect too much, especially with the commitments between club and county, but at the end of the day this is what I love doing, hurling for Limerick.”