Weekend hurling previews: Hard to call as Waterford and Cork square up

Meanwhile, Shane O'Neill begins his competitive term with Galway as they face Westmeath 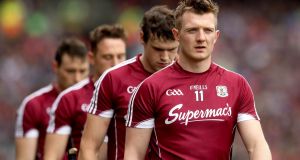 Joe Canning: will start for Galway for the first time since a groin injury derailed his championship last summer when his side host Westmeath at Pearse Stadium. Photograph: Ryan Byrne/Inpho

Shane O’Neill begins his competitive term by handing out three debuts for Galway, including Éanna Murphy in goal and Annaghdown’s Diarmuid Kilcommins, who will take his place in Galway’s big attacking cast. That unit still revolves around Joe Canning, starting here for the first time since a groin injury derailed his championship last summer. A shot to nothing for Shane O’Brien in his first season with Westmeath after last year’s encouraging promotion to the top flight. This will give Westmeath an experience of what lies ahead.

Incoming boss Liam Cahill signalled a new direction by omitting three-time All-Star Noel Connors and veteran forward Maurice Shanahan when he announced his panel for the season ahead last October. Austin Gleeson’s injury playing Fitzgibbon Cup this week and Philip Mahony’s decision to retire after ten years diminishes the experience within the dressing room for this game.

Still, Cork’s recent form in the MSL competition – encouraging in the first half against Limerick, absent in the second – was disconcerting. They are unknown quantity just now and although Kieran Kingston has identified consistency as a key quality for Cork, it may take a few more games before they arrive at that. Home win.

Division One Group B

A tough opening assignment for Colm Bonnar has been made more difficult with a series of rolling injury problems. Eoin Nolan will miss Carlow’s entire league. James Doyle, Brian Treacy and Séamus Murphy face a slow path to full fitness. Also, Carlow are suffering from a goal drought, with none in their past three games.

The locals will be hoping that Brian Lohan can bring some of the structured fury that distinguished his 1990s teams to this gifted Clare generation. He is making no grand claims about Clare at this time of year but they have the depth and quality to get their campaign up and running with relative comfort.

You can imagine Mattie Kenny’s automatic thought when he saw the fixtures masterplan. Oh God. They’ve snaffled every club prize going on Noreside and made it to last year’s All-Ireland final against all odds. And this is when Kilkenny hurling is supposed to be quietly rebuilding and all that. That was Kilkenny on a down year.

Local fans will hope to catch a glimpse of James Bergin after his heroics for Conahy Shamrocks in the All-Ireland junior final. The big change for Kilkenny fans will be on the sideline as Brian Cody will coach his team without the assistance of Mick Dempsey, who was with the squad since 2005. DJ Carey comes in as selector. Colin Fennelly will captain Kilkenny this year. The Kilkenny way will endure. They managed just 0-13 against Wexford in the Walsh Cup two weeks ago; expect better application of resources here.