Limerick could have a point to prove after New York, Tipp likely to keep powder dry 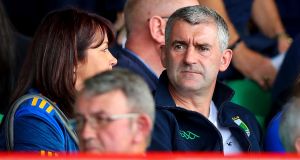 Cork have been a feeble league team recently, winning just eight games in the past four seasons - comfortably the fewest of any of the main counties. Daniel Kearney will be missed and Kingston won’t have Alan Cadogan, Christopher Joyce, Mark Ellis or Colm Spillane for a while. Look for the likes of Declan Dalton, Niall O’Leary and Billy Hennessy to get a spin or two.

Shane O’Neill must still be chasing his tail to some extent, a mere 10 weeks after his appointment. Colm Callanan has moved into the backroom team and both Johnny Glynn and Joseph Cooney are based abroad for the minute with no clarity yet on their intentions for the year. Tadhg Haran and Sean Bleahane have been making pre-season waves and will hope to kick on.

The winter was going fine and then New York happened. John Kiely has understandably pulled down the shutters in the aftermath of StreetFighterGate and it would be no surprise if Limerick hurled the lugs off everyone to make it up to him. Pat Ryan and Shane Dowling will be missing for a while, Barry Nash, Conor Boylan and Adrian Breen will look to step up.

Here’s a strange one - none of the current Tipp panel have a league medal to their name. they’ve played in five finals since they last won it in 2008 and lost all five. If they end up changing that this time around, it will probably be more by accident than design. Hard to see Sheedy scaring the horses this side of Easter, given Tipp’s age profile.

The team most in need of a good league. Cahill has lost Brick Walsh, Philip Mahony and Brian O’Halloran to retirement and won’t have Shane Bennett available to him in the short-to-medium term either. With Noel Connors and Maurice Shanahan dropped and Jake Dillon back on the scene, there has been significant player turnover. Job One is to lift morale off the floor.

After the highs of last year’s league, the removal of Joe Quaid didn’t seem to make a lot of sense. Here they are, all the same, ready to test themselves against the premium teams. Beating Carlow in the Walsh Cup was no bad start for Shane O’Brien and Aongus Clarke and Robbie Greville will carry the fight. But let’s not gild the lily - any point will be a triumph