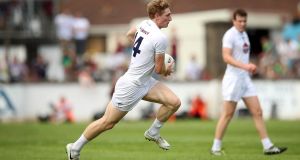 Kildare’s Daniel Flynn will be back in action after taking some time away. Photo: Ryan Byrne/Inpho

Steady as she goes for an Armagh outfit that looks to be improving. Charlie Vernon is the only departure of note from last year, while expectations are gathering around Conor Turbitt, a lightning young attacker who is likely to see gametime over the coming weeks. A couple of early draws hobbled them in Division Two last year – need to start better.

Eight of the matchday 26 from last year’s Ulster final have left the panel for one reason or another. Cian Mackey has retired, Conor Moynagh and Dara McVeety are gone travelling, Killian Clarke is on a year out. On the bright side, Conor Smith looks ready to kick-start his career after a couple of bad injuries. But on the whole, it looks like tough times ahead.

Only Mickey Harte has been in charge of his county longer than Colm Collins has been over Clare. Though the graph has risen steadily throughout his seven years, this looks as tough a season as they’ve had. Gary Brennan and Jamie Malone have stepped away for now and Sean O’Donoghue has gone home to America. Staying up would be quite the feat.

Sean Quigley isn’t on the panel, Tomás Corrigan has rejoined after a couple of seasons away. With Ultan Kelp and others out injured, Ryan McMenamin has tried a raft of youngsters in pre-season. Fermanagh came third last year despite being the lowest scorers in the division so it will be interesting to see if a change in management means a change in playing style.

Likely to be the best team in the division. Daniel Flynn and Niall Kelly are both back in the panel after taking time away, Ben McCormack has gone travelling but otherwise it looks like as strong a squad as O’Connor could have hoped for. With four home games – including the final two – it won’t say much for the summer if they aren’t promoted.

Mike Quirke is having to go with significantly fresher faces than he might have imagined. The Kingston brothers Paul and Donie have stepped away from the panel for work reasons and team captain Stephen Attride has gone to Australia for the year. One interesting addition is Cahir Healy, who hasn’t played football for Laois since 2012.

Conor Cox will miss some of the early programme against Laois, Fermanagh and Clare through injury but the back-to-back Connacht champions can get still their business done early. Darren O’Malley has moved to Abu Dhabi and while he may return later in the year, Anthony Cunningham will use the league to uncover a workable option at goalkeeper.

After two promotions in three seasons, the onus is in Jack Cooney’s side now to show they can continue looking up instead of down. Ray Connellan is back from his AFL adventure and while Kieran Martin is set to miss some early games with injury, John Heslin is back in harness too. Clare at home and Cavan away make for a crucial opening week.