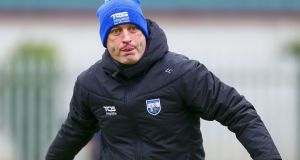 Waterford manager Liam Cahill: ‘A lot of modern day managers have a lot of business experience or a lot of life-coaching experience. I don’t have that.’ Ken Sutton/Inpho

The call came through when Liam Cahill was at a friend’s wedding in Cork last September. It wasn’t overly long after his Tipperary under-20 team had run up another All-Ireland final victory, making it titles at three different age grades in the space of four years. Cahill looked at his phone and saw a number he didn’t know and gave in to curiosity.

On the other end was Seán Michael O’Regan, the incoming Waterford chairman. “He was lucky he got me early on in the day,” Cahill laughs. “I probably wouldn’t have answered after the speeches.”

Cahill was a left-field idea for the gig. The mood in Waterford was bleak last Autumn, with Pádraic Fanning having left after just one season and the team having gone two full years without a championship victory. The atmosphere had become toxic, a kind of circular firing squad that was doing nobody any good. They were ripe for an outside voice.

“Obviously, there would have been concerns not just around what was going on on the field but around Waterford being known to have a sort of geographical divide as well,” Cahill says. “So you’d hear things about the city and county divide, about the east and west don’t get on, about the county board being in disarray, the whole set-up having no money, all that stuff. That’s the impression you’d have as an outsider looking in.”

And what of the players? Were they as down in the dumps as they looked?

“They were, yeah. They are guys with high standards and they were disappointed in themselves. They were disappointed to with what came after, having their integrity and their honesty questioned. A lot of the talk around the change of management, let’s call a spade a spade, would have been aimed at them and you’d have heard player power thrown around. So there was a lot of stuff going on in their heads as a unit.

“And probably regret too that a year that started out so well last year, getting to a league final, all of a sudden the wheels came off. They were sort of looking around them and going, ‘How did this happen?’ That’s the vibe I got from them, that they couldn’t quite understand it going so wrong.

“There’s still a little bit of a grey area there that they have to work out and if there’s signs of that during this league campaign, it’s something we’ll be looking out for. We’ll have to see what way we can fix it. Above all, we have to reinforce the fact of what’s gone is gone. A new brush sweeps everybody clean. Everybody is starting from the same point, the players know that from me. Reputations, past performances, none of that matters to me.”

That much was clear within a fortnight of Cahill taking the job when it was announced that among those surplus to his requirements were former All Stars Noel Connors and Maurice Shanahan. Both were cult heroes in Waterford and still just 29. For Cahill, it was his first real taste of the air that can swirl around his new digs.

“The key thing for me is I came into the job with no allegiance to any players. I didn’t know any of them, I didn’t have any baggage with any of them. My only knowledge of any Waterford players were from what I’d seen on the telly and games I’d been at myself. So what I was doing was looking at last year’s performances, looking at footage of matches and the games I’d seen live. That’s what my initial starting point was. That’s the only fair way to do it.

“Now, whether that changes over time depends on these players showing me something different. I know that doctors differ and patients die but I can do no more than go with my own instincts based on performances. For me, these were not big calls. And in fairness to Maurice and Noel, they were very respectful when I rang them up to speak to them.”

As a player, Cahill came and went leaving a lighter footprint in the sand than he’d have liked. A whippet corner-forward with a pipe-cleaner physique, he was man of the match in the 1996 Munster final while still only 18. Tipp lost a 10-point lead that day and Limerick ended his summer in the replay but Cahill’s performances were enough to win him an All Star at number 13. He was awarded his statue just a month after his 19th birthday, the youngest man in the photo. He could have been anything.

Instead, he had a bitty playing career. He came off the bench in the 1997 All-Ireland final as Tipp lost to Clare. Four years later, he sat on the bench throughout the final as English’s side won a first All-Ireland in a decade. He was in and out of favour throughout his 20s, never quite making himself as vital as he needed to.

“I never reached the level I should have for the ability I had,” he says now. “I wasn’t as consistent as I should have been as a player. It wasn’t through a lack of commitment, it was more that I would have benefited from a bit more guidance along the way.

“It was a different time. It was every man for himself. You come to training, you train as hard as you can and you go home and you spend a lot of time on your own, thinking. I made so many mistakes as a young fella. I had potential, I had talent but there were areas of my game that let me down. Some of it was from a skill perspective but it was mainly from a temperament point of view.

“My temperament would have always been something that I have fierce regrets about. I took playing poorly really bad. You’d be inconsolable after it, beating yourself up more than you should. My body language was never where it needed to be, especially at club level. I used to try better to manage it at county level. But the frustration I would feel if I wasn’t playing well would just consume me. I would be hot-headed and hard on myself.

“I look at the modern game now sometimes and the speed the ball moves and everything and part of me wonders would I be able to survive for 10 minutes in it. But then I look at the modern player and mentality-wise, they’re so much better equipped than I was. The real good modern player misses a chance and it’s gone five seconds later. He deals with it on the spot and moves on – the next ball comes, it’s a new ball and away you go. Whereas I would spend weeks beating myself up about a chance I missed.”

A couple of decades down the road, Cahill’s management style is clearly informed by those regrets.

“A lot of modern day managers have a lot of business experience or a lot of life-coaching experience. I don’t have that. But what I have is that experience of not having reached the heights I should have as a player and knowing in myself why that was.

“So now when I meet players and people, I’m straight up. I try to assess them as I see them. I try to be genuine and honest with them first. If they want to tell me what’s going on with them, great, I’m there to listen. If they don’t, that’s fine too and we’ll try to get them the tools to make them a better player. They don’t have to be coming to me like an open book wanting to be a better person – everybody is different. But what we’ll do is work together.”

The work has started and tomorrow they get their first report card. He can’t wait to see what it says.