GAA officials and referees brace themselves as new rules kick in, and this time it's for real

With Allianz leagues bursting into action, advanced mark looms like a dark cloud 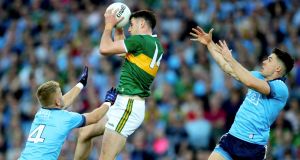 Donal Smyth, a former Meath All-Ireland goalkeeper, is in his first year as the GAA’s national match officials manager. He told Thursday’s football rules briefing in Croke Park that he had taken over in the role on July 29th last year, the day after the hurling semi-finals weekend, when the air was thick with controversies, from Hawk-Eye to a late, unnoticed deflection.

As consolation for this baptism of fire, he reflected that his predecessor, Pat Doherty, had started almost exactly nine years previously, the very day after the infamous Meath “goal” that robbed what had looked like being Louth’s first Leinster title in 53 years.

For Smyth and other officials, the coming days are also fraught with potential flashpoints. Although the new football rules were introduced as permanent changes at last October’s special congress in Cork and have been running since the start of the year, this weekend sees them kick in on a large-scale basis, as the Allianz leagues burst into action.

The new rules were trialled in last year’s league, but there’s no mistaking the heightened urgency of rules that are here to stay, compared to 12 months ago when everyone knew they wouldn’t apply for the championship.

Consequently, when it came to the advanced mark, a number of teams, including eventual five-in-a-row All-Ireland champions Dublin, chose largely to ignore it – although Smyth, commenting in an illustrative video clip, mentions that Paddy Andrews was one Dublin player who did make regular use of the novel option.

The advanced mark looms over the coming season like a dark cloud. Top football referee David Gough has already expressed reservations about its implementation on the basis of how difficult it can be to gauge 20 metres over random areas of a pitch where neither the position of the kick nor its destination are from lines marked on the ground.

Ominously, Smyth’s predecessor Pat Doherty had been the one speaker against the advanced mark in Cork – because it would be so difficult for referees.

Questions for Smyth came thick and fast from assembled media, who will start reporting in earnest on all of this when the league gets under way and who will, apart from GAA officials and teams, be those with the most acute need to know what’s going on.

For an advanced mark to be awarded, the ball must be kicked forward in play by at least 20 metres from outside the opposition 45 and then caught inside. The referee whistles to award it and the player then has a choice: either take a free kick, in which case he has to raise his hand, or play on.

Were someone to claim an advanced mark within the square and play on, would that not extend enormous latitude?

If he raises his hand, he can’t then decide to play on but must take the kick. Tweaks to the rule include giving the player 15 instead of five seconds to take the kick and requiring that opponents be at least 13 metres away, as opposed to 10.

Should a player decide to play on, he can’t be challenged during the time it requires to take four steps or until he plays the ball.

Among the questions asked was: were someone to claim an advanced mark within the square and play on, would that not extend enormous latitude?

How would referees time the 15 seconds? With a stop watch?

Answer: as they see fit.

Smyth was keen to emphasise the demarcation lines. Congress – or in this case, special congress – makes the rules and match officials enforce them as best they can. He spoke bullishly of the quality of the 40 referees, who will see duty during the league but also acknowledged, “of course there’ll be errors” in the course of the “80 or 90” decisions they have to make during a match.

There is also an anomaly in that black cards carry over in extra-time, whereas yellow cards don’t

Given the simplicity of the 20-metre kick-out, the other main change sees the sin bin introduced as punishment for black-card infractions. Although there has been unhappiness that the 10 minutes of the sin bin will include any stoppages, referees will be vigilant about policing time-wasting, and the clock only starts to run once play has been restarted after the carded player leaves the field.

There is also an anomaly in that black cards carry over in extra-time, whereas yellow cards don’t.

It was also pointed out that with marks of some sort now available all around the pitch – the advanced mark is complemented by a defensive mark, which a defender can take from a long ball played in, and of course, the pre-existing “kick-out mark”, which is awarded when a restart is fielded between the 45-metre lines – it is nevertheless not allowed to string them together.

This is because a kick from a mark doesn’t count as “open play”.