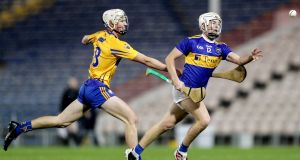 Tipperary began the defence of their All-Ireland Under-20 Hurling title with a come from behind victory over Clare at Semple Stadium on Monday.

Despite the comfortable margin of victory, Tipperary didn’t have things all their own way and were very much second best in the opening half to a Clare side who deservedly led 0-10 to 0-6 with Cian Galvin and Mark Rodgers to the fore.

However, Tipperary came out a much more determined team in the second half with Conor Bowe starring, finishing with seven points from play while Andrew Ormond was also impressive. Devon Ryan rounded off the win with a late penalty to set up a semi-final away to Waterford next Monday.

Cork, as expected, advanced to play Limerick next Monday night in the Munster U-20 Hurling Championship with a 14 point win over Kerry, who had moved up from the B grade but can be proud of their performance at the Austin Stack Park on Monday night.

Kerry more than matched their more vaunted opponents in the opening quarter and Cork held just a slender 0-4 to 0-3 lead.

But five unanswered points from Brian O’Sullivan, man of the match Dáire O’Leary with two and one each from Tommy O’Connell and Eoin Carey saw Cork move 0-9 to 0-4 in front and by half time Cork led 0-11 to 0-6.

Kerry stuck to Cork’s coattails for long periods of the second half and six third quarter points should have settled the issue but two Michael Slattery points and a free that went all the way to the Cork net, meant that Cork’s lead was only marginally increased by the end of the third quarter, 0-17 to 1-7.

However once Pat Ryan ran his bench, Cork pulled clear with substitute Brian Hayes scoring 1-2, but not before Kerry’s Nathan Guerin had found the Cork net to reduce the gap to 10.

But Cork had nine different scorers and their class was always going to see them through, though Kerry’s gusty performance surprised more than a few.

Corks wingback Dáire O’Leary was the best player on the pitch and scored four points to boot.