Masks, loads of parking and no people: Covering GAA in a pandemic 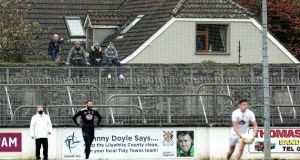 You can get used to anything. One of the early GAA responses to the pandemic was to rule out playing matches behind closed doors. There was, in a phrase, “no appetite” to put on matches in empty venues.

As a perspective it made complete sense. Gaelic games are all about representing people whether the parochial communities of clubs or the broader allegiance of county. If the people can’t be there, what’s the point?

As one senior official put, you’d just be seeing whether one team was better than another.

Maybe it was the experience of watching lockdown soccer that softened that attitude into one of something being better than nothing but a further influence was the successful staging of club matches up and down the country, for the most part behind closed doors.

Reporters became familiar with it. Saturday evening was my fourth visit to an effectively empty Parnell Park. I had always put on the mask as soon as getting out of the car and it was noticeable at the weekend that everyone was now wearing one - which hadn’t always been the case at club matches.

These protocols have been great for parking. With no pre-match traffic, it’s easy to find a spot at or near to the ground – a great convenience given that at times you might have to turn the passenger seat into a temporary work space.

It remained however incongruous to be watching a big intercounty rivalry in a top-level league match with no spectators and to be able to hear clearly the shouts of players on the field.

Post-match interviews are out in the open. That in itself isn’t unusual but will be when the bigger grounds start to stage events.

If we actually get that far. Seán Moran

This time the traffic was nowhere and the parking was everywhere. There was a slight pause when checking names at the gate but otherwise the journey and entrance to St Conleth’s Park on Sunday was clocked in a new personal best and a world record.

And a world and seemingly lifetime away from my last journey and entrance here, for the mastermind in sporting psychology that was the ‘Newbridge or Nowhere’ showdown of two summers ago, when Kildare knocked Mayo out of the championship. That day nobody was let near the town without a match ticket, and some of us would have got there quicker running down from the mountains.

The GAA press box has always been a place of unabashed intimacy, especially when it’s never been modernised and the generosity extends beyond the sharing of the last empty plug to sweets and dark chocolate and of course all the team news too. It’s a far lonelier place when your colleagues are spread throughout the empty stand below and masked from a word or even recognition.

There is greater intimacy with the players and managers, including eye-contact and a nod with Jack O’Connor as the Kildare manager takes one of the empty seats at the back of the stand for the first half, and no need to check whether that last Kildare score was another for Jimmy Hyland when you can hear his own team mates shouting “nice one Jimmy...”

A trio of Kildare supporters have scaled the wall at the far end where the River Liffey flows slowly by, but it feels eerily and uncomfortably quiet, each whistle blow from referee Cormac Reilly getting increasingly lonesome, before the final one signals not a whisper of a cheer, only a softly audible sigh of relief from O’Connor.

Nothing beats being there, only as both O’Connor and Cavan manager Mickey Graham later admitted, there’s not much craic for the players when they’re jumping into their own cars and heading straight home in what must feel like world record time. Same for everyone it seems. Ian O’Riordan

“I’m the fella who will be telling you all to stay the proper distance away from each other,” said the man over the PA system in Inniskeen just before throw-in on Saturday. Everyone looked at each other and wondered who he was talking to.

Surely not the Monaghan and Kerry subs sitting in the stand, nor the 10 or so younger Monaghan panel members over to the left-hand side. Nor even the dozen media grunts dotted around the place in seats that were barely within shouting distance from each other. There was nobody else there, save for a few hardy locals who’d burrowed through the hedge at the low goals and stood there basically daring someone to hunt them out of it.

It feels different to covering club games. There is uber-social distancing, for one thing. With case numbers rising and everyone hyper-aware, anything within eight seats feels like a Trumpish invasion of personal space. Most press boxes only have room for three or four people now so we’re having to spread out into the bleachers. Turns out these computers are called laptops for a reason.

Also, it’s a month colder. The county finals of mid-September were played in back-to-school weather. Trying to keep blood in the fingers while balancing a laptop on one knee and a notepad on the other while hot air rising from the facemask fogs up your glasses makes for a beleaguered, inelegant sight. This is not the life of a serious man.

On the upside, the teams have virtually no secrets now. Out here, everyone can hear you scream. Whether it’s the Monaghan backroom staff continually shouting “Get a job” at their players when play breaks up around the middle or Peter Keane roaring “Get him, Gavin!” over and over as Gavin White sprinted 70 yards to put in a tackle, the nuts and bolts of the game are more accessible than they’ve ever been.

It feels really weird to be at games with no crowds. But then, most things feel really weird these days. No reason intercounty GAA should be any different. Malachy Clerkin

“You’re the last one here,” says the steward at the gate as he scans his list at Tuam Stadium. It’s about 20 minutes before throw-in. He’s hat-ted and masked so it’s hard to tell if he’s joking or cross. It’s true I’ve cut it fine. The old excuse - that the traffic is backed up for miles - isn’t really an option. There haven’t been so few cars parked outside Tuam stadium for a Galway/Mayo match since the Second World War.

There’s no escaping the weirdness of it all. The teams go through their warm up. The managers are on the sideline. What’s missing?

People, music on the loudspeaker, high spirits, the usual crowd landing late from the pubs in the square, the tables laid out with chocolate bars still it their wholesale boxes and fizzy drinks chilled by Mother Nature, the live rendition of the anthem and the surging roar from the crowd in the concluding bars, the naming and shaming of the car registration number blocking some vital thoroughfare. Life, is all that’s missing.

These closed door games will never be anything less than strange and forced. But they are better than nothing. And the players are so wrapped up in the contest that they soon forget the crowd. Between the lines, the rules of engagement are just the same. The game falls into a pattern. Mayo play so well that their legions of fans may be tempted to stay home forever. Galway perform so poorly that they must be glad there’s nobody in to see it. Of course, the game is on television all around the country. It’s a bit of a head-wreck: games in empty stadiums watched by a national audience. Of course it’s not like the real, authentic thing. But it is better than nothing. Keith Duggan

1 Keith Duggan: Through the glories and the disgraces, we were all Maradona addicts
2 Diego Maradona dies of heart attack, aged 60
3 Andy Farrell to delve deeper into Irish squad for team to play Georgia
4 Darragh Ó Sé: Cork and Donegal went out with the wrong attitude
5 10 years on: The night Tiger Woods hit a fire hydrant and his world turned upside down
Real news has value SUBSCRIBE