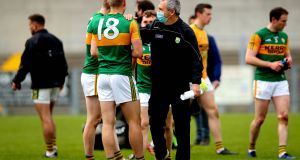 Kerry are on track to win Division One. Photo: Ryan Byrne/Inpho

The weekend’s resumption of the league hasn’t thinned out the options to any great extent. Meath, who were relegated before the lockdown, remain the only county with nothing to play for as the top four can theoretically win the title whereas the next three are all in danger of joining Meath.

It’s Kerry’s to lose. A win over Donegal gives Peter Keane’s side a first title since 2017. If however they lose, the winners of Galway v Dublin go top. Should that match end in a draw, Donegal come into the equation, as a victory over Kerry would make them winners, based on scoring difference, over Dublin and Galway.

If Mayo beat Tyrone they stay up and if defeated they go down, as they are behind Monaghan on the head-to-head. If Monaghan beat Meath they stay up and Tyrone take the drop unless they avoid defeat in Castlebar. Mayo have to better Monaghan’s result to get ahead of them.

Roscommon have been promoted and Fermanagh relegated. If Armagh, on seven points, beat Clare they will go up as well. Behind Armagh are Westmeath (on a large -22 scoring difference) and three counties on six points, Kildare, Cavan and Clare, each capable of either promotion or relegation and playing Westmeath, Roscommon and Armagh. Laois are a point behind and in danger of relegation if they don’t win in Fermanagh.

Cork have been promoted and Down will join them if they get anything from already relegated Louth and even quite possibly if they don’t. Derry’s only chance of going up is if Down lose and Longford beat Cork. That would leave three teams on nine with Derry having the best scoring difference in matches between themselves, Down and Longford, but an inferior head-to-head with Down. Louth have gone down and will be joined by Leitrim, Tipperary or Offaly. The first two play in the last match and if Leitrim win and Offaly don’t lose to Derry, Leitrim survive. Anything for Tipp and they stay up. If Offaly lose and Leitrim win, it’s potentially a three-way tie at the top of the table, requiring Leitrim to beat Tipp by at least six.

Promotion is still open here with three counties looking for two places. Wicklow, Wexford and Limerick are on eight points, in that order on scoring difference. If Limerick beat Sligo, they get promoted, as the other two play each other with the winner going up. Limerick have a superior head-to-head with Wicklow but lost to Wexford last weekend, all of which means if the latter two draw, Limerick must win.