Tipperary primed to copper-fasten their status 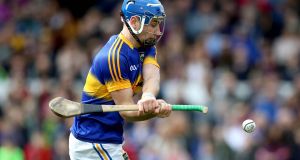 John McGrath: showed his predatory instincts and patience as he plundered 2-2 for Tipperary in the semi-final win over Wexford at Nowlan Park. Photograph: Ryan Byrne/Inpho

After an exciting Division 1A season, Tipperary emerged as the only team hitting its targets: in their case, that meant expanding the panel and playing with a diligence and purpose that has in the past eluded the county when reigning All-Ireland champions.

Illustrating that problem is the statistic that in the past 51 years Tipp have been champions on seven occasions but only once was that followed up by reaching the following season’s league final – and that match in 1992 was lost to Limerick.

The impact made by Michael Ryan’s team faded in the public consciousness as they failed to win the last two fixtures, one an exhibition shoot-out with Kilkenny and the other a narrow defeat in Cork with an understrength starting 15.

The two knock-out victories went unnoticed because steamrolling Offaly was always going to be the least interesting quarter-final and the irresistible late power-play against Wexford was obscured by a controversy that flared all week and into which Tipperary were drawn by the proposed suspension for Jason Forde, whose case will go to the CHC although in the meantime he will start.

In the end Galway have turned out to be credible opponents (even though they spent the season in Division 1B and failed to get promotion) on the basis of the counties’ championship encounters in the past two years, both decided by a point either way.

There is though more to it than that even if those matches provide the most recent point of reference given that the counties haven’t met in the regulation stages this season.

There has always been a feeling that Galway are a team primed to go off at various stages but never quite manage to do so with sufficient consistency to go all the way.

They have however posed serious questions of Tipperary. Primarily those have concerned centrefield where in the past two summers David Burke has been the dominant influence.

But Galway have also produced some good defensive displays with Daithí Burke to the fore but Adrian Tuohy – whose injury last August has tended to be overshadowed by Joe Canning’s – had been playing very well at corner back until forced off.

It’s the All-Ireland champions who have the issues this time with Séamus Callanan’s broken thumb ruling him out. Judged by his outstanding impact in the 2015 semi-final, that would be a major loss but Callanan takes time to come to the boil and whereas depriving him of game time and training with the championship around the corner isn’t ideal, his absence would on precedent be more acutely felt in the summer.

Even then, he was well marshalled by Galway last year and his tally went from 3-4 from play the previous season to zero last time out.

At this stage the most important Tipperary player is John McGrath, currently hurler of the year, who is lethal if given any supply of ball. His ability to get into the areas where he knows team-mates will find him was at the heart of the 2-2 he scored against Wexford as was his patience.

Having gone nearly an hour after his early goal and endured a couple of wides, he hit another 1-2 in the closing minutes when Tipp went to town on the scoreboard.

Galway actually have a dangerous range of weaponry themselves with Canning and David Burke maintaining their presence up front and Conor Cooney coming into form.

If there’s an area where they may encounter difficulties it is in the battle with the Tipp half backs who have been outstanding in the dovetailing between the Maher brothers, Ronan and captain Pádraic whose strength under high ball has been both a bulwark and launching pad for the team.

Overall Tipperary have been performing at too reliable a tempo not to win against ultimately erratic opponents.