Tipperary in a strong position to emulate great Kilkenny team

The parallels between Tipperary 2017 and Kilkenny 2007 are uncanny 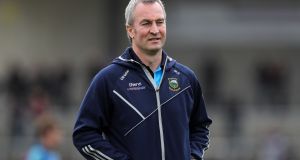 Michael Ryan: The template for how to proceed with the riches arrayed in front of him is there to cut out and keep – Brian Cody’s template. Photograph: Ryan Byrne/Inpho

The All-Ireland champions went through the group stage of the league winning three matches, losing one and drawing the other. They finished top of the table as the only team with seven points from five games and with a points difference of +28.

They beat Wexford in the semi-final by double figures to make it through to a decider against a team of perennial nearly-men, going in as warm if not overwhelming favourites. They fielded 29 players across those seven games.

Eagle-eyed readers will have guessed by now that we refer not to Tipperary’s 2017 vintage. But if you happen to not have at your fingertips the precise number of Tipp players who have seen action this spring, don’t feel bad. This won’t be on the test. It was 31, since you’re asking.

No, the team referred to in the intro is Brian Cody’s Kilkenny of 10 years ago. And apart from the number of players used, every other statistic used corresponds exactly to this Tipperary side, even down to the points difference. That they are identical is, of course, a statistical coincidence. That Tipp are retreading a similar path to hurling’s last great team is surely not.

The 2007 league followed what would turn out to be the first All-Ireland in the four-in-a-row. Cody was without the Ballyhale contingent until the latter stages and stuttered a bit as a consequence but by the time the clocks went forward, they were building up a head of steam.

It was around this time that the depth of Cody’s panel began to reveal itself as probably his greatest weapon. Well, greatest weapon not named Henry.

A combination of the club championship and a wedding/honeymoon meant Shefflin only turned up in the league final that spring. Cha Fitzpatrick and Mick Kavanagh didn’t appear until the semi-final, young bucks Michael Fennelly and TJ Reid not at all. All but Reid would play in that year’s All-Ireland final, the then 19-year-old Ballyhale up-and-comer an unused sub against Limerick come September.

Flash forward a decade and Tipp have motored through this league without Bonner Maher playing a minute. Cathal Barrett made his first start in the semi-final, Darren Gleeson sat out the first four games. The news that Séamus Callanan will miss the final with a broken thumb was met with a general shrug in most places during the week. John O’Dwyer will come in and the show will keep rolling.

Elsewhere, the parallels are uncanny. This Tipp team have conceded eight goals in seven games; that Kilkenny team conceded seven in seven. While Tipp 2017 have scored more goals – 16 in seven as opposed to nine in seven for Kilkenny 2007 – they’ve put up almost exactly the same number of points (129 for Kilkenny 2007, 130 for Tipp 2017). The figures would be dizzying if they weren’t for all intents and purposes the same.

Most encouraging from Mick Ryan’s point of view, the age profile of Tipp’s best team now and Kilkenny’s in 2007 is more or less identical.

Tipp’s from last Sunday with Michael Breen, Bonner Maher and O’Dwyer in for Jason Forde, Niall O’Meara and Steven O’Brien works out at 25.8. Kilkenny’s starting team from the 2007 All-Ireland final had an average age of 25.5. . We know this because we’ve seen it done before.

Ryan has too, of course.

The template for how to proceed with the riches arrayed in front of him is there to cut out and keep. Cody ran his empire on competition for places and Ryan is clearly of a mind to do the same.

That doesn’t mean chopping and changing for the sake of it – just as the likes of Noel Hickey, Jackie Tyrrell, Tommy Walsh, Brian Hogan, JJ Delaney and Eddie Brennan played more or less every game in 2007, so James Barry, the three Mahers, the two McGraths and Callanan have in 2017.

What it does mean though is the occasional strategic benching – Eoin Larkin was in and out of the team in 2007, ditto Bubbles O’Dwyer this time around.

And it means game time for the odd new face, carrying with it a chance not to play himself out of the team. On that score, maybe O’Brien is the 2017 version of PJ Ryan, the Kilkenny goalkeeper who replaced James McGarry for the Walsh Cup in 2007 – and then the league and then the championship and then the rest of McGarry’s career.

As newly-minted Irish Times columnist Jackie Tyrrell says elsewhere on this page, it’s up to Tipp now to decide how long they’re going to stay at the top and how much they want to win. Nobody is saying they’re going to win four-in-a-row but there is no question they’re starting from the right place.

By the by, for all their bounty, Kilkenny still lost the 2007 league final to Waterford. If you feel that could be a portent, Galway are available at an eminently backable price.