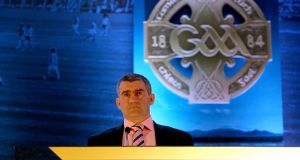 They haven’t done it since Bob Dylan first went electric and now Liam Sheedy believes Tipperary can put an end to that near ancient wait.

That was of course 1965, the year Tipp last won back-to-back All-Irelands – and indeed the last time they put a league title on top of one. That’s the first challenge, as they prepare to face Galway in Sunday’s league final, and Sheedy also reckons this Tipp team looks primed to double up again in 2017.

The league was actually the first piece of silverware Sheedy won as a player and then manager, guiding Tipp to their last league title in 2008 – before claiming the All-Ireland in 2010: one All-Ireland in the years since “is a poor return”, he says, but Tipp are unquestionably the form team going into Sunday’s showdown at the Gaelic Grounds.

“You don’t win All-Irelands in April, I’d be very wary of that,” says Sheedy “The reality is that Clare won the league last year and never really found their form in the Championship afterwards, so that is a danger that does exist.

“I think if you go back to the last number of years, they (Tipp) have probably been close to getting a few more (All-Irelands), so the return of one over the last six years is a poor return I would say, based on the talent that they have at their disposal. A few years it got away on them.

“But I certainly got the sense last year, after they won the match, I thought they looked calculated, that they seemed like a bunch that weren’t happy to just win one. I think they see what Kilkenny have done over the last number of years and the way they’ve dominated the sport and I certainly feel there’s a drive within this group to try to put it back to back.

“But to do that they have a long journey to travel, there’s a lot of hurdles they have to climb, they have to climb three hurdles in Munster alone. The Munster championship was surprisingly easy for them last year. I don’t see it being that easy to navigate this year.

Sheedy, speaking in Croke Park at the launch of The Bank of Ireland Celtic Challenge, a national hurling development competition, reckons Tipp’s form so far this season has been “very impressive, very impressive” (so good he says it twice).

“I think the biggest thing Michael Ryan has learned over the course of the league is the strength that he has in his panel. If guys are missing and the team are still winning, it’s dreamland, it really is, from a management perspective. So it seems to be a really competitive arena. I think really it’s not the first 15 that wins All-Irelands, I feel, it’s probably the second 15.

“And 19 different scorers, in the league, that tells its story – you quieten one of them but then somebody else will go and do the damage. I think that’s what makes Tipp the team they are at the moment – they have a defence that is very, very sticky and hard to break down and up front they have guys that will hurt you if they get space.

“But you know, going back to the last time we put it back to back, it’s the 60s, so I don’t think anyone is under any illusions here, we’re not a county that does back to back very well. So the scars are there for everyone to see in that regard. We have a habit of going to sleep after we get one. So I think there’ll be an awareness of that within the county.

“The reality is that we were only winning one in 10 since then and that’s the harsh reality. But I think this group are hell bent on looking to change that. I think it can be used as a real driving force for the squad. They haven’t won a league title since 2008. To get a chance to get that medal on Sunday, it’s definitely in the top three medals you can get as an inter-county player so they have the chance on Sunday to do that, which I’m sure they’ll go hell bent for.”

Nearly seven years on, meanwhile, Sheedy has no regrets about stepping down in the aftermath of their 2010 All-Ireland: “Is there ever a really good time to go? Looking back, hindsight, hearsay, the bottom line is that I knew before ever a ball was pucked in the 2010 final that I was out of road. I think it was a nice way for me to go out, rather than go out as a loser.”