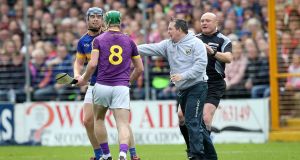 As reported in The Irish Times on Tuesday, the eight-week suspension keeps him off the sideline for Wexford’s opening championship match against one of the Leinster round-robin qualifiers, scheduled for Saturday 27th May and also should they win, the semi-final against provincial champions Kilkenny, scheduled for 10th June.

Depending on whether he decides to accept the charge or take a case to the Central hearing Committee it could keep him out for longer as the ban doesn’t begin until the charge has been accepted, and not from the time of the offence.

Fitzgerald has been charged under Rule 7.2 (c) IIa which covers any type of physical interference with an opposing player or team official. If handed down it will suspend him from all coaching duties, including taking training and attending official county functions.

The former Clare manager was seen on the field jostling with Tipperary’s Jason Forde after running on in the aftermath of Tipp’s 18th-minute second goal during the build-up to which Wexford’s James Breen was clearly fouled.

Seen by a wide audience the pitch incursion attracted negative publicity for the GAA and Fitzgerald arguably made matters worse for himself by appearing to suggest that the action was calculated.

“When Tipp start to get a blitz on you, you just have to – just try to make sure I could lift my lads a small bit. I was hoping they might respond a small bit more. They responded after that which was no harm with a bit of fight.”